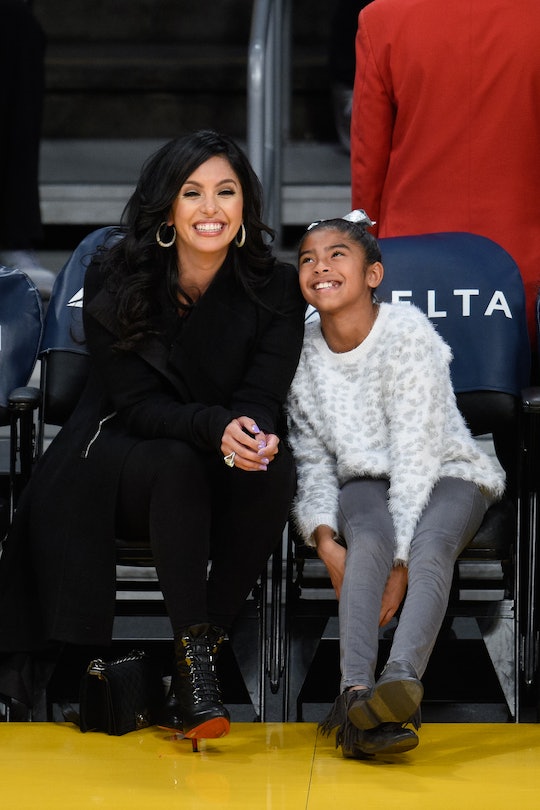 Vanessa Bryant's life changed forever on Jan. 26, the day she lost her husband, NBA legend Kobe Bryant, and her 13-year-old daughter, Gianna, in a tragic helicopter crash. She'd understandably been silent in the moments after the horrific news broke, but on Wednesday evening Bryant penned a touching tribute to her daughter Gianna on Instagram, honoring her memory and sharing that she "will ALWAYS be so proud" of her.

The NBA legend was traveling with his daughter Gianna, who also went by "Gigi," and seven others via helicopter to the Mamba Sports Academy for a basketball game in Thousand Oaks, California when it crashed, CNN reported. Gianna was the second oldest daughter of Kobe and Vanessa and was considered an exceptional basketball player, much like her father. So much so that she earned the nickname "Mambacita," a version of her father's nickname "Black Mamba." In the days since their untimely deaths, millions of people have shared tributes to both father and daughter.

And on Wednesday, Bryant attended Harbor Day School where Gianna was a student in the 8th grade and a star basketball player to watch her teammates officially retire her team jersey. Afterwards, she shared a photo of the retired #2 jersey with a beautiful message for her daughter on Instagram. "My Gigi. I love you! I miss you," she wrote. "You’ve taught us all that no act of kindness is ever too small. Mommy is still and will ALWAYS be so proud of you mamacita."

Bryant penned another touching tribute to her daughter on Jan. 29, three days after the accident. At the time, she shared a beautiful family photo and a message of gratitude to all of the fans who had reached out to her and her daughters after the accident. She wrote that the family needed the blessings "now more than ever" after losing "my adoring husband, Kobe — the amazing father of our children; and my beautiful, sweet Gianna — a loving, thoughtful, and wonderful daughter, and amazing sister to Natalia, Bianka, and Capri."

"There aren’t enough words to describe our pain right now," she wrote on Instagram last month. "I take comfort in knowing that Kobe and Gigi both knew that they were so deeply loved. We were so incredibly blessed to have them in our lives. I wish they were here with us forever. They were our beautiful blessings taken from us too soon."

Vanessa Bryant's tribute to her daughter Gianna is a powerful, emotional reminder that a mother's love for her child has no end. That their bond will continue long past today. That there will be no time when she stops being proud of her daughter and all that she would have been.