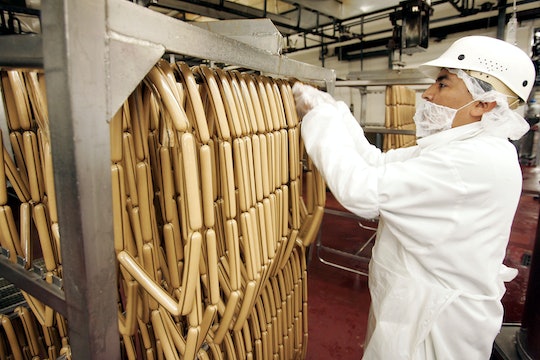 Memorial Day, the unofficial start of summer, is right around the corner and thousands of Americans will celebrate by firing up the grill. But party-goers might want to think about sticking to burgers. Unfortunately, Vienna Beef is recalling thousands of pounds of hot dogs. The recall is due to possible metal contamination, according to the USDA.

The Chicago-based company is recalling 2,030 pounds of their skinless beef frankfurters, which were shipped to Illinois, Indiana, and Wisconsin. So far, there have been no reports of injuries or illnesses, according to Fox News.

They were produced on May 2 and include the following, according to the USDA recall alert:

Government officials are urging consumers to check their freezers and refrigerators for these recalled products.

Anyone concerned about potential illness or contamination from these recalled franks are urged to call their health providers, according to CBS News.

But, it's a bad time for a hot dog recall of this scale. According to the National Hotdog and Sausage Council, the peak of hot dog eating season is between Memorial and Labor Day when Americans consume about 7 billion hot dogs, or 818 hot dogs every minute.

And, while one would think that New Yorkers eat the most hot dogs per year, it's actually Los Angeles who takes home the prize. They eat 31 million pounds of hot dogs each year. Do you think it comes with a side of avocado toast?

This isn't the first time a major beef brand has recalled hot dogs. A few years ago, Sabrett recalled a whopping 7,196,084 hot dogs when consumers reported finding bones in the product, according to the Daily Beast.

Even hot dog giant Oscar Meyer went through its own recall in 2014, when there was a labeling mix up that put cheese dogs inside plain hot dog packages, according to ABC News Philadelphia. This affected over 96,000 pounds of Oscar Meyer Classic Weiners.

So, if hot dogs are off the menu for the time being, what is the next logical choice? Hamburgers, of course. But ground beef quality has been in questions too, thanks to several recent recalls.

Just this month, a Georgia meat company announced the recall of 57 tons of ground beef from their facilities due to E. Coli risks, according to Fatherly. Unfortunately, hundreds had been hospitalized due to the infected hamburger.

Pass the veggie burgers and shrimp kabobs, please. It's time to rethink summer menus until the coast is clear. As always, consumers can keep up to date with current recalls by searching the FDA website. In this case, it's always better to be safe than sorry.

More Like This
Can The Baby Have That?
This Is What Experts Say About Eating Hot Dogs During Pregnancy
The Covid Vaccine For Kids Under 5 Has Been Sent To The FDA For Review
I'll Be First In Line To Vaccinate My Kids, But I'll Never Forget That We Were Last