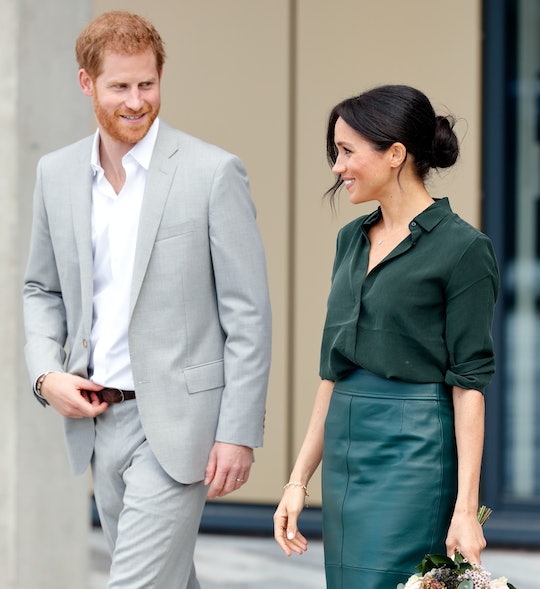 Since taking their relationship public, the Duke and Duchess of Sussex have never been shy about showing a little affection for each other in public. While the two have never been spotted, let's say, making out in public, cameras have caught the couple in a number of tender moments, perhaps more than any other royal couple. So, it's not altogether surprising that there's an entire video compilation of Prince Harry fixing Meghan Markle's hair floating around the internet right now.

Over the course of their relationship, Prince Harry and Markle have been seen walking arm in arm, holding hands, exchanging loving looks, leaning in close to whisper, and placing their hands on each others' lower backs. And while these public displays of affection are certainly evidence of their love for each other, perhaps there's nothing as swoon-worthy as watching Prince Harry lovingly fix his wife's hair. Whether he's smoothing out her ponytail or calming her windswept strands, a video shared Sunday by a Markle fan account on Twitter shows the Duke of Sussex is "the most attentive husband."

In the video, Prince Harry can be seen fixing Markle's hair on four separate occasions. Twice, he untucks her ponytail after she's had something placed around her neck. In another clip, he reaches out and casually smooths her ponytail, which has gotten caught on her shoulder and collar, down her back. In the video's final clip, Prince Harry can be seen running both hands over Markle's hair to smooth it after a gust of wind has blown it about. In the clip, the pair catch eyes and laugh as they both wrangle the windswept strands back into place.

While the clips in this video aren't necessarily recent — the last one, for example, dates back to September 2018 when Markle launched a charity cookbook — they do feel largely representational of the very natural looking PDA we often see Prince Harry and Markle exhibit when together.

Body language expert Judi James recently told The Mirror in January that while Prince Harry and Markle's touches suggested the couple's relationship remains loving and romantic, some of their interactions appeared to be nonverbal attempts to reassure and calm each other. "Both seem keen to reassure the other, with Harry looking more watchful of his wife than usual since their emotional interview in South Africa," James said of how the two interacted when visiting the Canadian High Commissioner in early January.

Could Prince Harry's repeated fixing of Markle's hair be an example of his watchful and protective nature or is it merely an endearing sign of his love for his wife? It's probably fair to assume it's a little bit of both.

More Like This
Sox The Cat Is The Companion We Never Knew Buzz Lightyear Needed
Elon Musk's Child Files To Change Name, No Longer Wants To Be "Related" To Father
Jennifer Lopez Shared A Super Romantic Video Of Ben Affleck To Celebrate Father’s Day
Chris Evans Set The Record Straight About Those Photos From His Disneyland Visit