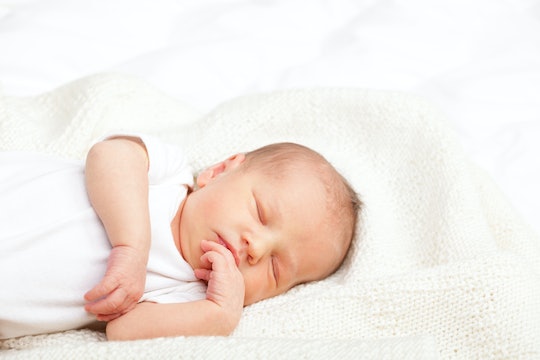 This month, Oregon became the first state to offer a third gender on its birth certificate. Now, another West Coast state has followed suit: This week, Washington announced a new non-binary gender option on its birth certificates. That means thousands of children born in the state will now have the chance to have their government documents reflect their authentic selves.

On Thursday, the Washington State Department of Health passed a new rule that creates a third gender option on state birth certificates, according to The Stranger. The law, which goes into effect Jan. 27, will allow non-binary and gender non-conforming residents to change their gender to "X," which represents all genders outside of the male-female binary, The Stranger reported. In order to make the change, a person would have to complete the request, sign it, have it notarized, and then submit it to the state health department. No doctor's note needed unless you're a minor, according to The Stranger.

Christie Spice, state registrar and director of Center for Health Statistics at Washington's state health department, said, according to The Seattle Times,

The most important thing is that we are trying to reflect that norms are changing and provide people with options that match their living experience. This is an opportunity to reduce risk of harassment and promote health equity.

The "X" gender option is not only for non-binary residents, including parents, born in Washington state. The Department of Health defined X to include, but not limited to, "intersex, agender, amalgagender, androgynous, bigender, demigender, female-to-male, genderfluid, genderqueer, male-to-female, neutrois, nonbinary, pangender, third sex, transgender, transsexual, Two Spirit, and unspecified," according to The Seattle Times. The new option will apply to children and adults who want to amend their birth certificates. (The law does not apply to newborns; their gender marker options are still "male," "female," and "undetermined.")

Many LGBTQ advocates in the state and across the country have called the Washington State Department of Health's decision to include a third gender option a historic move. Jeremiah Allen, director of TRANSform Washington, a public education campaign supported by Pride Foundation, said in a statement,

This is a monumental step by the state to recognize that there are thousands of Washingtonians who are neither male nor female. This follows a growing international recognition of the rights of indigenous and gender diverse people to be recognized fully for who they are by their governments.

We know that binary gender markers on government documents, including birth certificates, are insufficient both as a means to accurately reflect gender and to ensure equality. [T]he Department of Health took a critical step in eliminating social and legal barriers that undermine the health, safety, and equality of people because of their gender.

Washington is only one of two states to recognize the rights of transgender, gender non-conforming, and non-binary residents on government documents. Oregon became the first state to offer a non-binary option on its birth certificates on Jan. 1, according to Willamette Week. California will become the third state to do so when its law, Senate Bill 179, which passed in October, takes effect on Sept. 1 of this year, The New York Times reported. (Washington, D.C. has also offered gender-neutral options on its driver's licenses, according to CNN.)

But while advocates applaud the new law, they do recognize that it's not perfect. There are some barriers that will make it harder for certain residents — such as youth and people who are incarcerated — to amend their birth certificates, according to The Stranger. Karter Booher, executive director of Ingersoll Gender Center, a transgender and gender non-conforming advocacy group, said in a statement,

There are, of course, some logistics to work out as the Department of Health is now the only state agency that allows a gender marker that is not strictly male or female. The U.S. Department of State, which controls the passport process, also doesn’t recognize genders outside the gender binary. We are celebrating this initial victory, and looking forward to a multi-year, multi-agency effort to recognize people of all genders.

Although more work needs to be done for the rights of transgender, gender non-conforming, and non-binary people to be recognized fully by the government, Washington state's new law is an important first step. Parents and children in the state will no longer have to hide their authentic selves on their government documents.

Correction: A previous version of this article stated that Washington's new law applies to newborns; it does not. It only applies to minors and adults who want to amend their birth certificates.