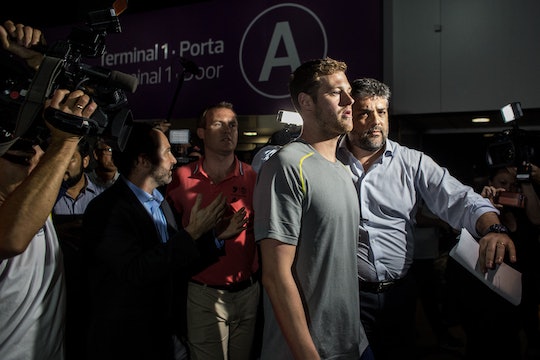 Were US Swimmers Arrested For Their Robbery Claims? Ryan Lochte Is Already Back Home

Ryan Lochte and three of his U.S. Swimming teammates might be in some hot water. On Sunday, he reported that they had been robbed at gunpoint after a party they attended in Rio. Last night, when the team tried to board a plane to head home, two members of the team were detained. Did Ryan Lochte or other U.S. swimmers get arrested?

In a statement to Romper, USOC spokesperson Patrick Sandusky confirmed that swimmers Jack Conger and Gunnar Bentz were detained:

Jack Conger and Gunnar Bentz were detained Wednesday night shortly before their flight was scheduled to depart from Rio. They were released by local authorities with the understanding that they would continue their discussions about the incident on Thursday. James Feigen is also communicating with local authorities and intends to make further statements regarding the incident on Thursday as well. We will continue to provide updated information as it is appropriate.

There have been questions about the validity of the robbery claim since Lochte reported it. On Wednesday, a judge ordered the seizure of Lochte's passport, pending an investigation into his claim.

Lochte reported that early Sunday morning, after attending a party in Rio, he and his teammates Jimmy Feigen, Conger, and Bentz were returning to their hotel when the taxi they were riding in was stopped by police. He then alleged that they were not police at all, but rather, armed robbers who were disguised as police. The robbers allegedly told them to get on the ground, and the swimmers did, except for Lochte who recalled in a statement:

I refused, I was like we didn't do anything wrong, so — I'm not getting down on the ground. And then the guy pulled out his gun, he cocked it, put it to my forehead and he said, 'Get down,' and I put my hands up, I was like 'whatever.' He took our money, he took my wallet — he left my cell phone, he left my credentials.

Lochte originally denied that a robbery occurred to USOC and didn't initially report the crime to Brazilian police. The police only began an investigation after media outlets got wind of the story and began reporting on it. Lochte stated he was afraid that the swimmers would get in trouble, so he was reluctant to say anything. In an interview by phone with Matt Lauer, he changed certain elements on his original story, including the part where the robbers had posed as police. He instead told Lauer that they had been robbed when they stopped at a gas station to use the bathroom.

When pressed about the inconsistencies, Lochte cited the trauma of the experience of the mugging. Brazilian judge Keyla Blank, however, was not convinced. She also cited security footage taken of the swimmers after the alleged robbery showed them to be joking around and she felt this behavior was incongruous with having just been robbed at gunpoint.

In the U.S., suspects can't be held without a warrant, but in Brazil the law is quite different. The police who removed the swimmers from the plane had a court order to detain and question them. Per Brazilian law, filing a false police report could get the teammates six months' detention and a fine. In Brazil, it's not uncommon for suspects to be "arrested first, asked questions later," a practice that many believe has contributed to overflowing federal prisons.

Brazilian law also states that foreigners are not immune: territoriality principle means that the U.S. swimmers could be detained, arrested, and tried according to Brazilian law even though they aren't citizens of the country.