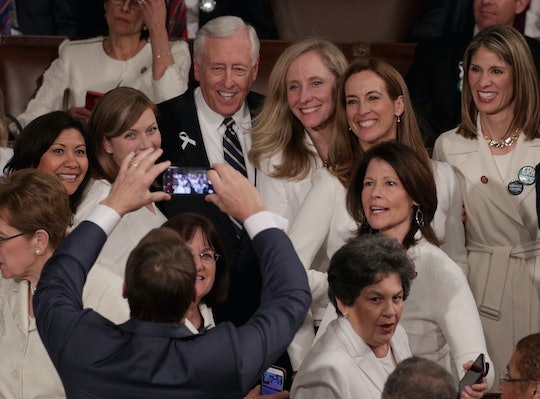 Here's Why Lawmakers Wore White Ribbons During The SOTU

During his State of the Union address, Donald Trump spoke in-depth about unity. Little did he know that unity was already happening right in front of his eyes, as many members of Congress — both men and women — united by wearing the color white in various different ways. One way was by wearing a white ribbon, but what do the white ribbons mean? For the men and women wearing a white ribbon on the house floor during Trump's address, it was all about solidarity.

While it was obvious that many of the newly appointed female lawmakers chose to wear white for the State of the Union, that wasn't the only way Congress showed unity during the address. Many men and women also wore white ribbons on their lapels and tops to show that they, too, stood in solidarity with the women of Congress. According to ABC News, the women chose to wear white in honor of the women's suffrage movement. In fact, 2019 marks the 100th anniversary of Congress passing the 19th Amendment which allowed women the right to vote. Needless to say, this State of the Union was a historical one for both America and Congress.

Both Trump and Vice President, Mike Pence, were notably not wearing white ribbons on their lapels. Neither was First Lady Melania Trump, the president's daughter, Ivanka Trump, or her husband, Jared Kushner.

Of the men who chose to wore white ribbons during the address, Congressman Steny Hoyer of Maryland, was extremely proud to do so.

"Proud to join House Democrats in wearing white or a white ribbon at the #SOTU to send a respectful message that we stand with women across the country and will continue to defend their rights," the Congressman wrote on Twitter as a caption to a photo of all of the lawmakers lining a staircase in white, which you can see above. He also thanked the House Democrat women for organizing the "respectful" message.

Representative Jim McGovern of Massachusetts was also pretty pumped to join in on the united movement. "Proud to wear a white ribbon tonight in solidarity w/ the women of the 116th Congress," the democrat wrote as the caption of his retweet. He made sure to add that it was the 19th Amendment's 100th anniversary, too. Within the retweet was a picture of the notable House Democrats in white, with representative Alexandria Ocasio-Cortez front and center.

While the white ribbons and outfits definitely stood out on the House floor, the women of Congress were also given a moment to shine when the President himself gave them a well deserved shout out.

"All Americans can be proud that we have more women in the workforce than ever before," the President told the floor, to which the Congresswomen dressed in white quickly stood up to applaud. He then went on to address them directly, saying: "we also have more women serving in Congress than at any time before."

The moment brought on one of the longest and most exciting pauses during the State of the Union, ending with the entire women chanting "USA!" Now that's an America we can all get down with, so lets get more of that going on ASAP.