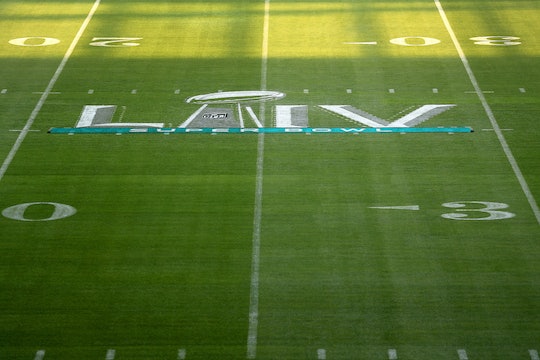 It's Time To Decode What Super Bowl LIV Stands For

As the Kansas City Chiefs and San Francisco 49ers hit the field on Sunday night, a question no one really wants to ask over a bowl of buffalo chicken dip is what exactly does Super Bowl LIV stand for in roman numerals? Well, let's decode, shall we?

The Chiefs and 49ers will face off against each other in Super Bowl LIV on Sunday, Feb. 2, starting at 6:30 p.m ET. This is the 54th year the NFL is hosting football's biggest game of the year, which means that Super Bowl LIV stands for Super Bowl 54. Now, if you want to impress your friends at your Super Bowl party, here's a little more detail. The roman numeral "L" means 50 and "IV" means 4, so when you have L and IV together, you've got 54. Boom.

But why exactly does the NFL use roman numerals for Super Bowl titles? It all started after Super Bowl 5, which took place January 1971. This system was adopted "to clarify any confusion that may occur because the NFL Championship Game — the Super Bowl — is played in the year following the chronologically recorded season," according to the NFL media guide. And there you have it!

Super Bowl LIV, aka Super Bowl 54, will surely be an eventful and memorable evening. Beyond the game itself in Miami, Florida, Jennifer Lopez and Shakira will perform during the halftime show. What's more, this is the Kansas City Chiefs' first Super Bowl in 50 years, according to CBS Sports, and everyone loves an underdog story.

So get your chips, spinach artichoke dip, and impress your friends with your knowledge of roman numerals during Super Bowl LIV.

More Like This
Viral TikTok Breaks Down How Beautifully Bluey Depicts One Character’s Infertility
The Summer I Turned Pretty Is A Beautiful Coming-Of-Age Story For Teens & Parents
Who Is Eleven's Mom On Stranger Things? Here’s What We Know...
Everything Families Need To Know About The Westminster Dog Show