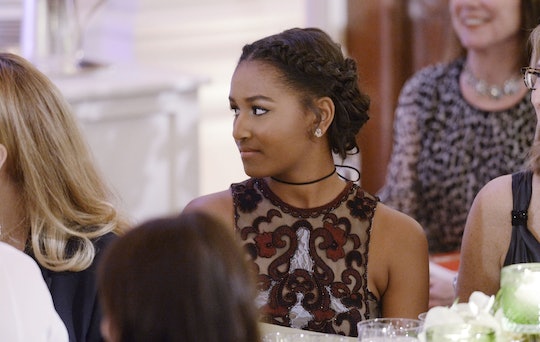 Like so many other Americans, I've enjoyed watching Michelle and former President Barack Obama's lovely daughters, Sasha and Malia, grow up before my very eyes. Just recently, in fact, 18-year-old Sasha went to prom! Where has the time gone? It's hard to believe the former first daughter is, well, officially an adult, but what grade is Sasha Obama in now? And is she planning to go off to college?

As the Obama family's youngest just marked one of the biggest youthful milestones of all — high school graduation! — this would mean that Sasha has just wrapped up her senior year of high school and is on her way to being a freshman in college, according to USA Today. Sasha had been studying at Sidwell Friends School in Washington, D.C., and over the weekend, the schools' social media showed a photo of the Class of 2019 alongside a quote from commencement speaker Sheila Johnson. "Life has never been about you or about me. Life and all that matters within it has always been about us," the caption read.

Personally, this milestone is especially wild to think about, considering that I have distinct memories of Sasha over the years, from walking hand in hand with her parents off of Air Force One to wearing some adorably preppy and stylish outfits that almost matched her sister Malia's on the campaign trail during the president's time in the Oval Office.

Like many Americans, I found the Obama family refreshing and inspiring when they came to prominence, and was excited to follow their progress as they raised their girls in the White House.

Following President Donald Trump's election, the Obama sisters naturally got less attention from the media and the public. But curiosity about the former first daughters has spiked yet again as photos from Sasha's prom went viral, according to Newsweek, and she then, of course, celebrated her high school graduation not long after.

While not many details are known about Sasha's prom night — such as whether her date was from her own school or another — it was fun, nonetheless, to see the photos from late May, which included her sister Malia and an erstwhile Secret Service agent in the background.

Though the Obamas have not yet confirmed whether Sasha plans to head off to college in the fall, Us Weekly reported that the 18-year-old may have chosen to attend the University of Michigan.

Meanwhile, as Sasha and Malia are both adults nowadays, Michelle and Barack Obama will likely be spending their time concentrating on their exciting projects, such as a Hollywood production deal with Netflix, as The New York Times reported.

Moving into normal, everyday life after eight years in the White House can't be easy, but perhaps especially so for the POTUS' kids. But, according Obama himself, they handled this lifestyle "so well," as HuffPost reported. "They are just wonderful girls. They’re smart and funny, but most importantly, they’re kind... I could not be prouder," Obama told the Tonight Show's Jimmy Fallon in 2016. Fellow Americans couldn't agree more.

More Like This
Dads Share What Paid Family Leave Would Mean To Them In Heartwarming Video
Obamas Issue Powerful Statements After Supreme Court Ends Roe v. Wade
This Map Illustrates Just How Many States Would Ban Abortion If Roe V. Wade Is Overturned
6 Takeaways From The White House’s First-Ever Parents Press Conference