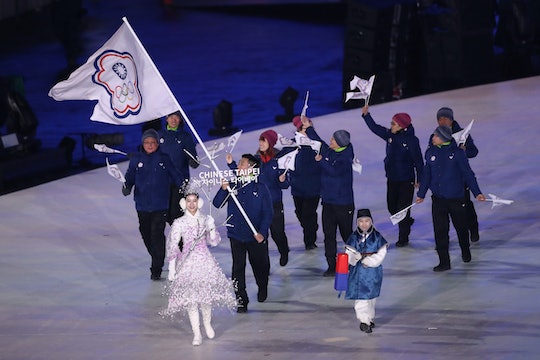 What Is Chinese Taipei At The Olympics? Here's What You Need To Know

It seems like every Olympics, there's a moment or two of confusion when the Chinese Taipei team comes marching out. After all, it's not a name we hear on a daily basis, so many people end up wondering: exactly what is Chinese Taipei at the Olympics? Did a bunch of us skip out on this particular social studies lesson?

As it turns out, whether you recognize the name or not, chances are you're familiar with the nation that stands behind it: "Chinese Taipei" is simply the name Taiwan, also known officially as the Republic of China, uses for the Olympics. Taiwan signed an agreement with the International Olympic Committee all the way back in 1981, according to The New York Times, agreeing to be known as Chinese Taipei in order to participate in the Olympics.

At the time, the IOC offered to have Taiwan play under the name "Taiwan" — but the Kuomintang, the nationalists who rule Taiwan, have long insisted on having a name connected to China. This is why Taiwan is officially known as the Republic of China, while China is the People's Republic of China.

The entire issue comes from a long-standing disagreement between the governments of China and Taiwan, both of whom claim to be the actual leaders of China. The Taiwanese government, the Kuomintang (or KMT), ruled China for more than 20 years before it was overthrown by the Chinese government (the Chinese Communist Party) in 1949. At that point, KMT retreated to Taiwan, an island off of China, and continued to rule independently there, according to The Economist.

China still refuses to acknowledge the independence of Taiwan, and both governments claim to be leaders of the same country, although Taiwan largely operates independently (and its power only reaches as far as the confines of its islands). And while most Taiwanese people say that Taiwan is its own independent country, other countries have frequently denied them that standing: since 1971, the United Nations has solely recognized People’s Republic of China.

The United States — and a swath of other countries — generally take the same approach in the China-Taiwan conflict, although President Trump recently threw off the international status quo by taking a call with Taiwanese President Tsai Ing-wen in December, and diplomatic feathers have remained ruffled ever since.

For many Taiwanese people, needing to compete as "Chinese Taipei" is a point of contention, and it's an issue that's growing increasingly more grating for many Taiwanese people as the country has grown more confident in its independent identity. (In 1991, only 13.6 percent of respondents in an annual poll felt Taiwanese, but by 2006, a second survey found more than 80 percent identified as Taiwanese.)

As "Chinese Taipei" in the Olympics, Taiwan must compete under a flag that's not its own, and it is not able to use its national anthem, according to CNN.

Coen Blaauw, the executive director of the Formosan Association for Public Affairs (an advocacy group for Taiwanese independence), told CNN in 2016:

Not only is the name 'Chinese Taipei' humiliating for the 23 million people of the democratic country of Taiwan, we are concerned that the name will stick. China's veto power and approval over Taiwan's role on the international stage should not be a prerequisite for Taiwanese participation in international organizations like the Olympics.

There's no sign of when things might change, but it will take a lot of work and diplomacy between China and Taiwan before it does. For now, however, Taiwan continues to march under a flag that does not match its Republic of China flag, and to compete under a nation name it doesn't identify with.