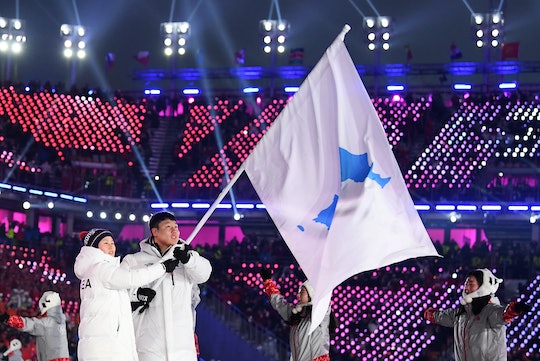 What Is The Flag The Koreas Carried At The Opening Ceremony? It's A Symbol Of Unity

For those who may be unaware, the 2018 Winter Olympics have started in PyeongChang, South Korea. The opening ceremony won't air on NBC in the United States until Friday night, but the event actually already happened overseas (at about 6 a.m. Eastern Time on Friday). And during the opening ceremony, a unified team of Korean athletes marched together under one flag. But what is the flag the Koreas carried at the opening ceremony? It's a symbol of unity between South and North Korea, but some Koreans have mixed feelings about the possibility of a unified Korea, which the flag is meant to illustrate.

The striking flag is known as the Korean Unification Flag, according to CNN. It includes a blue silhouette of the Korean peninsula, as well as the outlying islands. And this isn't the first time the two countries have marched underneath it.

Athletes from the two countries marched jointly behind the unification flag in the opening ceremony of the Olympic Winter Games in Turin in 2006, according to the official website of the Olympics. That was the most recent time it was used, but it was also featured at the 1991 World Table Tennis Championships, as well as a number of sporting events in the years since, CNN reported.

So yea, it's kind of a big deal that the athletes from South and North Korea marched under this flag, particularly after the past year, which has been "marked by escalating fears of war and increasing angry rhetoric between Pyongyang and Washington," TIME reported.

But is unification something the people of South or North Korea even want? There were anti-unification protests outside of the stadium during the ceremony, Business Insider reported, and it appears that younger South Koreans are actually not fans of the idea of reintegrating with the North. A recent survey found that more than 70 percent of South Koreans in their 20s were actually against reunification, according to The Washington Post.

But the fact that the two countries could come together for the Olympics is still a really amazing thing. The last time North Korea even participated in the Winter Olympics was in 2010 in Vancouver, according to Business Insider. This year, the country sent a small delegation to the Games. Plus, there's a joint North and South Korean women's ice hockey team competing in PyeongChang, according to CNN.

Korea has been divided since 1945, Smithsonian reported. So no matter how the citizens of either country feel about actually unifying as one nation one day, it's definitely notable that the two countries can work together for the Winter Games. The South Korean President, Moon Jae-in, and his wife even shook hands with North Korean leader Kim Jong Un’s younger sister, Kim Yo Jong, as they waited for the opening ceremony to start, TIME reported. A visit to the South by a member of the Kim family is considered "unprecedented," according to the outlet.

Athletes from both nations carried the Korean unification flag was carried into the opening ceremony. South Korean bobsledder Won Yun-jong and North Korean ice hockey player Hwang Chung-gum presented the flag together, The Guardian reported. And two athletes from the joint Koreas women's hockey team carried the Olympic torch up to former Olympic champion figure skater Yuna Kim, who lit the cauldron, according to The Chicago Tribune. So the flag was not the only symbolic representation of unity at this year's Olympic Games.

The Moons, Kim, and North Korea’s "nominal head of state," Kim Yong Nam, all stood as athletes from both Koreas walked together behind the unification flag, TIME reported. Clearly, the leaders of both South and North Korea are trying to use more than just the unification flag to convey unity in PyeongChang, and it will be interesting to see how all of the athletes from the Koreas do in the 2018 Winter Olympics.