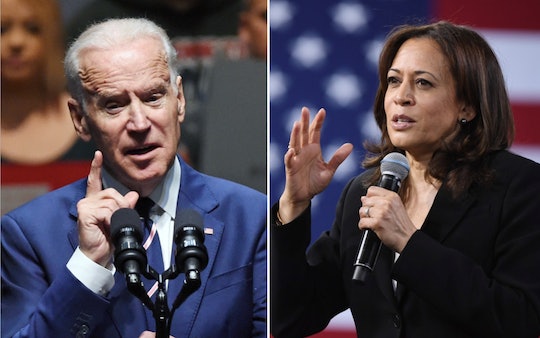 On the second night of the 2020 Democratic debates, Sen. Kamala Harris called out former Vice President Joe Biden's political past and record on civil rights, specifically working with segregationists and his opposition to busing decades ago. But what exactly is the history of busing in the United States?

At the debate on Thursday night, when the topic of race and police reform were being discussed, Harris chimed in. "As the only African-American on stage, I would like to speak,” she said, according to CNN, and then directed her attention Biden and said:

I do not believe you are a racist and I agree with you when you commit yourself to the importance of finding common ground, but I also believe, and it's personal, and it was hurtful to hear you talk about the reputations of two United States senators who [have] built their reputations and career on the segregation of race in this country. It was not only that, but you also worked with them to oppose there was a little girl in California who was part of the second class to integrate her public schools and she was bussed to school every day. That little girl was me. So I will tell you that on this subject, it cannot be an intellectual debate among Democrats. We have to take it seriously. We have to act swiftly.

She continued, "There is not a black man I know, be he a relative, a friend or a coworker who has not been the subject of profiling or discrimination. My sister and I had to deal with the neighbor who told us her parents couldn't play with us because we were black."

Following the heated moment, Harris' official Twitter page shared a childhood photo of the presidential candidate with a simple, but moving caption: "There was a little girl in California who was bussed to school. That little girl was me."

The term busing — also known as desegregation busing — was the "practice of transporting students to schools within or outside their local school districts as a means of rectifying racial segregation," according to Encyclopedia Britannica.

The desegregation of schools in America was obviously a major moment in history from the Civil Rights Movement and the landmark 1954 Brown v. Board of Education Supreme Court case made that a reality, finally outlawing discrimination in schools, according to the Library of Congress. However, many schools did not become "integrated until many years later" due to factors like a city's demographics — i.e. predominately black or white towns — the Library of Congress explains.

Following Brown v. Board of Education, busing was enacted as a remedy to end school desegregation and it "was fervently supported by civil rights groups," according to Splinter.

Still, segregation continued. In 1971, nearly two decades after the landmark case, the U.S. Supreme Court ruled to uphold the use of busing to "achieve racial desegregation in schools," according to The New York Times, as many schools still "remained segregated."

Fast forward a few years later. In 1974, Biden, a 30-something freshman senator at the time, voiced his opposition to the federal government enacting the using of busing, according to Politico.

Biden’s history with busing was brought back into the spotlight after CNN published letters from the 1970s that show his "opposition to busing" and support of segregationist Mississippi Sen. James Eastland. Earlier this week, Rucker Johnson, author of the book Children of the Dream: Why School Integration Works, told NBC News he thinks while Biden has "been good overall on civil rights, was a leader on anti-busing... A leader on giving America the language to oppose it despite it being the most effective means of school integration at that time."

Earlier this year, a spokesman for Biden told The Washington Post the presidential candidate "never thought busing was the best way to integrate schools in Delaware — a position which most people now agree with... As he said during those many years of debate, busing would not achieve equal opportunity. And it didn’t."

On Thursday night, according to HuffPost, Biden responded to Harris' criticism of his past record by saying he didn't believe the federal government should have intervened with busing and he "did not praise racists" with his actions, adding:

I ran because of civil rights. I continue to think we have to make fundamental changes in civil rights... I did not oppose busing in America. What I opposed was busing ordered by the Department of Education ― that’s what I opposed.

There's been both support and criticism of the system of desegregation busing over the years. And it's also important to realize that there's some recent data to suggest that school segregation may have actually gotten worse in the past few decades. So if history is going to teach policymakers and voters anything, it's that we need to pay attention to the past to ensure we're working to foster an inclusive, progressive nation for America's children.