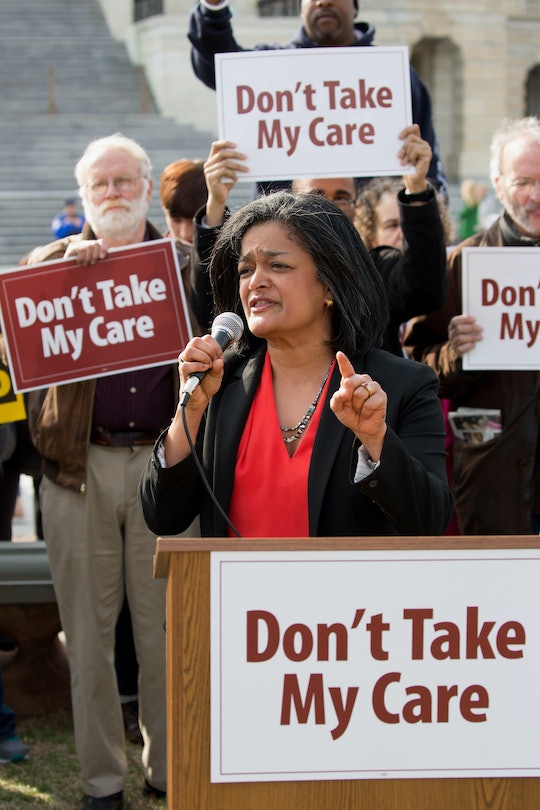 On Tuesday night, President Donald Trump will give his first State of the Union address, and many will be tuning in whether they are fans of the current president or not. But on one social media platform and in Washington D.C., people have come up with their own alternatives to the SOTU. So what is the State of OUR Union event, and the #WomensSOTU? On Tuesday, the #WomensSOTU trending hashtag featured tons of facts, awesome graphics, and informative statements about the state of women in this country, partly in reaction to the SOTU address scheduled later that night.

Trump is scheduled to deliver his first State of the Union address at 9 p.m. Eastern Time, according to The New York Times. But the #WomensSOTU was going strong hours before that. The hashtag featured information about women's education, the gender pay gap, the Equal Rights Amendment, and so much more. It was even intersectional, with mention of things like the disparity in pay between women of different races. All in all, it seems to be an inclusive alternative to the scheduled SOTU address.

And on the same evening as the State of the Union, there will also be a separate event in Washington, D.C. organized by lawmakers and activists called the “State of OUR Union,” according to Roll Call. So there's both a social media campaign and an in-person, political event in response to Trump's first SOTU, which is a very interesting development indeed.

The State of OUR Union event will "address persistent gender inequality and release new polling data about the standing of women in America," according to a statement about the event provided to Romper.

And that's what the #WomensSOTU seemed to be about as well. Though the alternative event at the National Press Club will feature speakers like Tarana Burke — the woman behind Girls for Gender Equity and the #MeToo movement — and Rep. Pramila Jayapal of Washington and Rep. Judy Chu of California, the Women's State of the Union on Twitter was open to anyone and everyone who used the hashtag.

However, organizations like the Institute for Women's Policy Research and some political representatives and activists seemed to be particularly dedicated to the targeted action on Twitter.

The message of the official State of the Union address by Trump "will be one of unity as he tries to appeal to a fiercely divided Congress," according to Politico. Trump will probably also talk about economic growth in the United States as well as his "America-first" policy when it comes to trade. Trump also plans to reveal the details of his infrastructure plan, the outlet reported. He will probably try to tout the greatness of his administration, and claim that everyone is better off since he took office.

But many women feel that things are not so great for them in the United States, and that seems to be part of the reasoning behind the #WomensSOTU hashtag and the State of OUR Union event. The #MeToo movement has done an excellent job at highlighting a lot of the harassment and violence many women face in their everyday lives, but a hashtag isn't enough.

Symbolic protests against the harassment and abuse of women have taken place at many recent awards shows, including the 2018 Golden Globes event — where many women wore black in solidarity with survivors of sexual abuse, according to Cosmopolitan. And the official State of the Union will be no different, even though it's a political event instead. Several Democratic women plan to wear black to Trump’s State of the Union address to show support for the #MeToo movement, Cosmopolitan reported.

But more needs to be done, and awareness is key. The #WomensSOTU may seem like a silly hashtag at first glance, but it's actually spreading some really valuable information to potentially millions of readers, and that's nothing to scoff at.

If the state of union for women was strong in the U.S., we would already have pay equity, workplace discrimination would be a thing of the past, and more women would be present when legislators debate issues involving women's health, to name a few concerns the #WomensSOTU brought up on Twitter.

So if the state of women in America is something that Trump brings up during his address tonight, just remember – there's a whole hashtag to refute claims he might make.