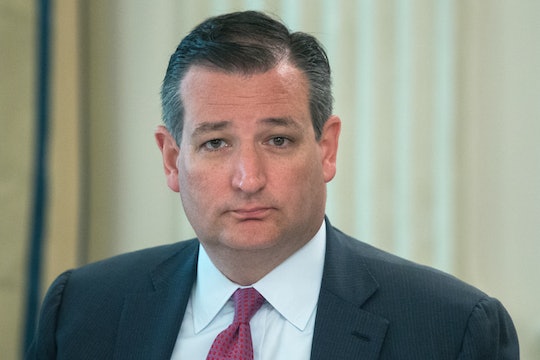 If you logged onto social media at any point on Tuesday morning, chances are you saw at least one person mention Sen. Ted Cruz and his Twitter account. It's been a while since the former Republican presidential candidate made headlines, so it's completely understandable if you're wondering why one simple tweet liked by Cruz's Twitter account is blowing up the internet. What tweet did Ted Cruz like, and why is everyone and their mother commenting on it?

As it turns out, on Monday night, Cruz's account "liked" a pornographic video posted on Twitter by user @SexuallPosts. (Romper reached out to Cruz's representatives regarding the Twitter incident, but did not hear back immediately.) Absolutely scandalous, right? Except not really — or at least, it wouldn't be for most people on social media. For many, including a good number of folks in government, a "like" of that kind would be nothing more than an embarrassing mistake, worthy of a sheepish laugh, an apology if noticed, and a quick "unliking" of the photo. After all, what Cruz does in his private life is no one's business but his own, right? Who is anyone else to judge?

But the thing is, Cruz has a long history of judging other people's private lives pretty harshly. In 2007, for instance, Cruz's legal team tried to defend an existing Texas law that banned the sale of sex toys, or "obscene devices," as Cruz's team called them. According to Mother Jones, Cruz's office claimed there was no "substantive-due-process right to stimulate one’s genitals for nonmedical purposes unrelated to procreation or outside of an interpersonal relationship."

Cruz told The Washington Post on Tuesday that a staffing mistake was to blame for the "like," saying:

There are a number of people on the team who have access to the account. It appears that someone inadvertently hit the ‘like’ button and when we discovered the post, which was I guess an hour or two later, we pulled it down. It was a staffing issue and it was inadvertent, it was a mistake, it was not a deliberate action. We’re dealing with it internally but it was a mistake, it was not malicious conduct.

There have been several different reactions to Cruz's tweet liking — from laughs to calls for Cruz to say he wasn't behind it. But personally, I think the best reaction that could come from this is for Cruz and similar politicians to stay out of others' private lives and step away from issues related to other people's bodies. If someone wants to sell or buy sex toys for "nonmedical purposes unrelated to procreation," so be it. An actress' film history doesn't determine her talent. This is just another case of slut-shaming, except this time it's been turned around on Cruz.

Chances are, politicians who want to police others' bodies don't want other people to look too closely at their own actions — or, I suppose, the actions of their staffers. Hopefully, Cruz and his staff will think twice about his own "likes" on his Twitter account before he decides to advocate for laws that invade individuals' private lives again. No one cares if Cruz did or did not like a certain video — but many people do care about his continued desire to get involved in other people's private decisions.