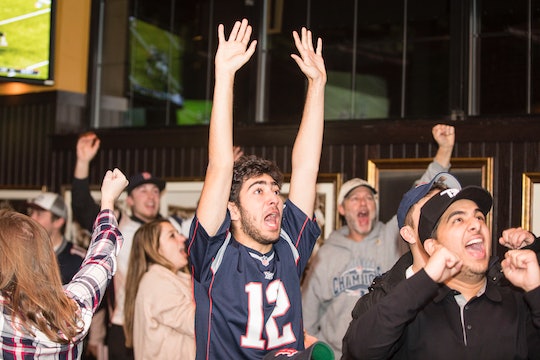 Everyone's Screen Blacked Out During The Super Bowl & Twitter Has *Theories*

I don't know about you, but I don't really watch the Super Bowl for the actual football part, I watch for all the entertaining stuff in between the boring game play. But I have to admit, not all of it always makes sense. For example, what was the black screen during the Super Bowl? For a few seconds everybody's screen went dark and now Twitter has some pretty intriguing theories for what happened.

It's possible that what happened was just some sort of glitch. Maybe somebody's commercial violated some sort of legal clause (I don't really know). Maybe the action was supposed to be back on the field and somebody messed up. Maybe everyone's TVs simultaneously freaked out and it's a sign of the impending apocalypse. It's really impossible for anyone to tell at this moment, but that doesn't mean that people didn't try. All that we really do know is that it happened to everyone all at the same time and somebody really messed up. Or maybe not. Maybe this was intentional. Maybe it's just some sort of avant-garde thing that the rest of us don't understand. Maybe it was a political statement. In either case, Twitter was confused and tried to figure it out.

While some Twitter users were just confused, many others joked, or theorized, that this was just some extreme Super Bowl commercial that we don't understand yet. Some even argued that it was the best commercial of the game so far.

Because the Super Bowl is the most viewed television event of the entire year, ad space is extraordinarily expensive, and the ads produced tend to be an entertainment source in and of themselves. This year, for example, Sports Illustrated estimated that a 30 second ad at the Super Bowl would cost a whopping $5 million. That is a lot of dollars. So naturally some Twitter users were wondering who spent $5 million for 30 seconds of black screen.

Others had a slightly different take on the matter. Maybe somebody paid for the ad space but, well, didn't pay.

Look, I'm not saying one way or another, but this seems like a pretty viable theory. After all, since space at the Super Bowl is so coveted, one would think that every second of available time would be accounted for. This is the biggest night not just for sports, but more importantly for the capitalism that defines our society.

But my favorite theory about the dark screen comes from Twitter user Brent Reser about This Is Us. His theory is that the episode of the show that will air after the game takes place in today's time, and Kate is explaining to Toby how Jack died while the Super Bowl is on. The screen goes black when she tells him he died in the fire. I mean, I love the tin foil aspect of this theory, but seeing as that space would have been worth millions of dollars in ad income to the network, it seems like a pretty expensive creative decision.

Another, perhaps more plausible, theory, is that Oreo's ad was supposed to air during that time according to AdWeek reporter Katie Richards, who tweeted the brand, "U up?"

But maybe this moment from Oreo was cleverer than we all thought. Do you remember the 2013 Super Bowl? The lights went out and while everyone else scrambled, Oreo tweeted "Power out? No problem" with an image stating, "You can still dunk in the dark." Maybe Oreo was just testing everyone's Super Bowl memory. Maybe they were going full meta.

For what it's worth, Oreo also recently tweeted this:

Just something to think about. But one thing is definitely clear, and that is that the 30 seconds of black screen will go down as one of the most memorable moments from 2018's Super Bowl. Ironic.

More Like This
Where Are The Toys Of Toy Story Today?
If You’re Worried About Your Child’s Progress With Reading & Writing, This App Could Help
Obamas Issue Powerful Statements After Supreme Court Ends Roe v. Wade
This Map Illustrates Just How Many States Would Ban Abortion If Roe V. Wade Is Overturned