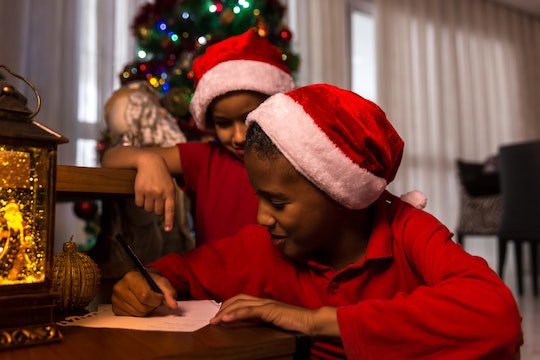 Your Child Won't Believe In Santa Forever, & Here's When Most Kids Stop

For many little kids, the magic and mystery of Christmas is bound up with Santa Claus. What kid wouldn't be fascinated by a jolly old guy who gives out free presents and travels all over the world with flying reindeer? But keeping that magic alive gets harder and harder as they get older and more skeptical (and hear tales from friends who no longer believe). So exactly when do kids stop believing in Santa, typically? It looks like there's an average age.

What makes kids believe in Santa in the first place hinges on one big factor. Writing for The Conversation, Psychologist Jacqueline Wooley noted that the most significant reason for kids to believe is how hard moms and dads work to make them believe. From visits to see Santa and take pictures together, to sending letters off to the North Pole, leaving out plates of cookies, and of course, mentioning the naughty and nice lists whenever there's questionable behavior, parents push the Santa story pretty hard.

The tricks that parents employ to keep the Santa legend going have only gotten more sophisticated over the years. There's the 'Elf on the Shelf', of course, who monitors a child's behavior on Santa's behalf. There's NORAD, which tracks Santa's flight all over the world, and there are a bunch of apps that let you photoshop a picture of Santa in your living room. No wonder so many kids believe.

Luckily though, for many kids the realization that Santa isn't real comes slowly over time, and not one in one traumatic burst of enlightenment. Developmental psychologist Thalia Goldstein told The Cut that her lab's research found five distinct stages of belief, in which kids progress from believing the Santa they meet at the mall is the one and only, to gradually realizing the truth.

Some parents decide not to teach their kids about Santa at all, focusing on the problematic nature of telling lies (even magical white lies), or believing that the man in red distracts from the religious roots of the holiday. And some parents simply refuse to lie to their kids. Even psychologists are also split on the issue.

The lead researcher of the aforementioned University of Exeter study noted on the school’s website that he’d heard from adults around the world who are seemingly forever affected by what their parents told them about St. Nick. “I have been overwhelmed by people getting in touch to say they were affected by the lack of trust involved when they discovered Santa wasn’t real,” wrote Professor Chris Boyle. He noted that the reactions ranged from disappointment to amusement.

So if you're looking for a clearcut answer on what to do about Santa in your house, it's really up to you. Whether you fight to keep the magic alive as long as possible (even when your child starts to express doubt) or you decide not to go down the Kris Kringle path at all, your kid will be OK whatever you decide.

This article was originally published on Dec. 13, 2018