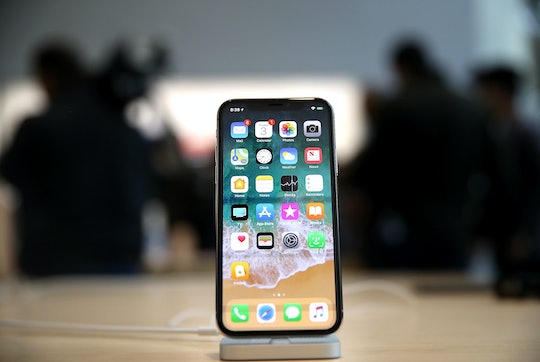 Here How Cold Is Too Cold For Your iPhone

When it comes to slogging through a long, cold winter, there's lots to get annoyed about — the piles of mushy snow, the fact that it's nearly impossible to drag yourself outside to exercise, and, of course, your iPhone randomly dying all the time. When does an iPhone get too cold? Turns out that these fancy, highly-advanced devices don't function well in below-freezing temperatures, much like many of us.

Odds are that this is an all-too-familiar scenario: You charge your phone to full capacity and run out the door into a polar vortex. You've got things to coordinate, people to talk to, and sure, probably some Twitter to check, but you try to be quick about it. You've been burned by a bad battery before. And then, right as you're texting your friend to figure out your exact meeting spot, your iPhone just shuts off, leaving you freezing and a little lost. (And potentially forcing you to run into a nearby bodega to beg the guys there to let you charge it for a few minutes, so your friend doesn't think you've stood her up.)

Apple is well-aware of the cold weather iPhone problem, and actually only recommends using its devices when "the ambient temperature is between 0 degrees and 35 degrees C (32 degrees to 95 degrees F)." Sure, that's fine if you live in a consistently-temperate climate (or only travel through a well-insulated underground series of tunnels). But if you've gotten hooked on constant communication, and the temperature is dropping, it's not so easy.

According to Apple, your iPhone is trying to protect itself from the extreme cold when it suddenly shuts off, but it should be fine once it's back in the warmth. According to the "Support" section on the Apple website:

The conventional wisdom seems to be that it's best to keep phones inside of a warm bag, or in a pocket so that they can get some of that sweet, sweet body heat, and to use them as sparingly as possible while outside in the winter months.

Still, Apple has indicated that developers are working on the problem. Apparently, people are particularly up in arms about the ultra-expensive iPhone X's response to the cold. On one Reddit thread about the iPhone X, users complained that the phone screen stopped working and became unresponsive to touch when in the cold. According to Fox News, Apple is working on a software update to fix the issue, although the company hasn't said when this update will be available, so it seems likely that users will have to muddle through the rest of this winter by taking a page out of the past, and either actually figuring out where they're going before they go outside, or being open to some good old-fashioned adventure.

It's a strange and frustrating thing that a device that can connect you with someone across the freaking world can't last 10 minutes in a New York winter. But, hey, there can be one upside. In the times when my phone has died and I don't have some piece of pertinent information, I've realized the kindness of strangers. Just last night, an awesome woman at FedEx looked up an address for me when I was running late to a meeting and my phone refused to hold a charge.

Still, in the winter, maybe you should take a cue from your phone, and stay in the warmth as much as possible.