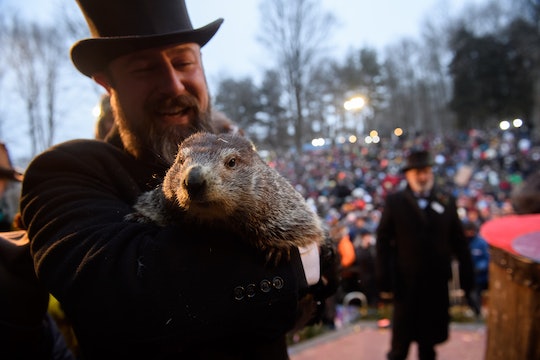 This Year's Groundhog Day Sounds So Futuristic, It Might Be Time For Robot Phil

If you are someone who likes for their seasonal weather patterns to be determined by a large marmot climbing out of a hole in the ground in Pennsylvania, then you are likely eagerly awaiting this year's Groundhog Day. Groundhog Day in 2020 shall fall on Sunday, February 2, just as it does every year. But did you realize this technically means it will be on 02.02.2020? Does this dazzle you? If it does, I know just the t-shirt for you...

Groundhog Day always falls on Feb. 2, as this marks the midway point of winter. And just as we have done every year for over a century, men in old timey top hats will gather on a hill in a place called Gobbler's Knob, and see if a groundhog named Phil sees his shadow.

If he does, we can look forward to six more weeks of being smothered by our down parkas. And if he doesn't, well, then we can all head straight online and start buying this year's newest gladiator sandals, for spring shall come early this year!

Though don't go too crazy with the credit card... I mean, let's be real, Phil isn't exactly a stellar meteorologist. Since 1988, he's been "right" 14 times and "wrong" 18 times, reported USA Today. So yeah. He's no Al Roker.

Our beloved (and admittedly, kind of strange) Groundhog Day tradition has pretty much remained the same every year since its inception in 1887. But interestingly, the holiday may be in for a shake up here soon. Yes, you heard me. Groundhog Day has taken some heat recently. Why? Well, the animal rights organization PETA isn't a huge fan.

But doesn't it just crawl out of a hole? You might be thinking. It isn't like they make it crawl up onto a Weber Grill, and then everyone sits down for marmot burgers...

True, very true. But the groundhog used in Punxsutawney draws huge crowds every year. And PETA says that forcing an animal into the middle of a large crowd like that can cause it great distress. PETA's solution? Robot groundhogs.

As the president of PETA told The Washington Post, "A robotic rodent could replicate the popularity of Sony’s artificial Aibo dog, while AI technology affixed to the creature could actually predict the weather, perhaps more accurately than Phil."

I guess it is going to be 02.02.2020. I mean, if ever there was a futuristic sounding date, it's that one. I suppose robot groundhogs make sense. But I do wonder... what will PETA do when the AI Phil emerges from his hole, reports that spring is exactly 32 days, 9 hours, and 15 seconds away, and then shoots lasers from his eyes and commences the robot groundhog takeover? Does Punxsutawney have the kind of firepower needed to combat this inevitable occurrence? I'm dubious.

And of course, because it's Groundhog Day, we'll all be forced to wake up and relive the robot takeover again the next day. And the next. And the day after that. So make a note: an endless loop of robot groundhog takeovers is coming soon. This 02.02.2020.