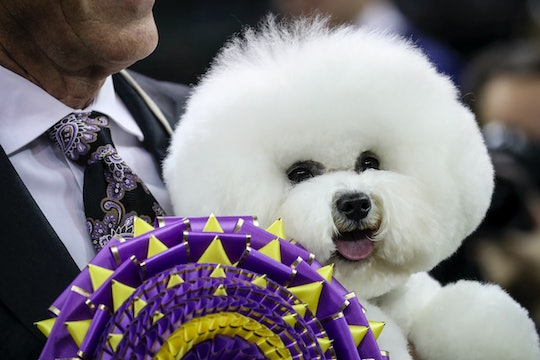 When Is Westminster Dog Show's Best In Show Announced? It Might Be A Late Night

If you're one of the zillions of dog lovers who's planning on tuning in to the 143rd Westminster Kennel Dog Show on Monday, February 11 (and Tuesday, February 12), it's safe to say you're probably not going to watch the whole thing. That's because, like so many sporting events/competitions, it's super long. And while most of it is pretty entertaining, you're really waiting for the big moment... so when is Westminster's Best In Show? You definitely don't want to miss the moment when they crown the very best doggo in all the land.

Again, it's not that you don't want to see all the stuff leading up to the major reveal: Who doesn't love to hang out watching perfectly-coiffed pups trot around in circles all day? You don't have to be an expert on show dogs to get into it, either; even if you don't know a herding dog from a non-sporting dog or what makes one Chow Chow superior to another, it's still a live event starring literally thousands of ultimately unpredictable participants. Hence, the odds are pretty, pretty, pretty good something interesting will happen. (Speaking of "thousands" of participants: As AMNY reported, around 2,800 canines are competing in the 2019 show, including "76 Dachshunds, 48 French Bulldogs, 47 Labrador retrievers, 53 Bernese Mountain Dogs" and many, many more.)

Still, there are naturally going to be certain points when the odds will be better of something interesting happening (besides Best in Show). Here's how the schedule breaks down, as explained on the Westminster Kennel Club website: Breed judging for various groups will take place on both Monday and Tuesday, from 8 a.m. to 4:30 p.m. (Monday's groups include hound, toy, non-sporting and herding; sporting, working and terrier groups are on Tuesday). The junior (children's) showmanship preliminaries will also be happening on both days between 8 a.m. and 4:30 p.m.; Dog Show 101 (which evaluates breeding stock) is on Monday from noon to 1 p.m., with the Dog Show 101 presentation to follow on Tuesday in the same time slot. If you won't have a chance to watch until after work on Monday night, you'll catch group judging of hound, toy, non-sporting and herding groups from 7:30 to 11:30 p.m. (Oh, and if you have no idea how to watch any of this, check out the Sporting News website for an incredibly helpful list of which networks will be broadcasting which portions of the event.)

Not surprisingly, the competition really heats up on Tuesday night, which wraps up with... The Best in Show awards! The action starts at 7 p.m. with the junior showmanship finals and continues with judging of sporting, working and terrier groups (at 7:30). So what time, exactly, does the Best in Show part get started? Unfortunately, there must be no way to predict, exactly, because there's no official start time being given for the grand finale. "At the end" is the closest anybody is willing to get. (I can report this with confidence because I tried really, really, really hard to find out.)

However, it's safe to say that the event won't be running ahead of schedule. So if you're determined to see the most important, dramatic moments, you should probably plan on sticking close to your screen for most of the night, particularly the last couple of hours or so. Just like the Olympics or the Oscars, if you're determined to witness awards ceremony history firsthand, you've got to sacrifice a few hours to the couch. But it'll be totally worth it when you see moments like these (featuring last year's Best in Show winner, a Bichon Frise named Flynn) in real time:

Now that's a proud little puffball! Will this year's big winner also be made of marshmallow fluff? Make a date with your TV on Tuesday night to find out.