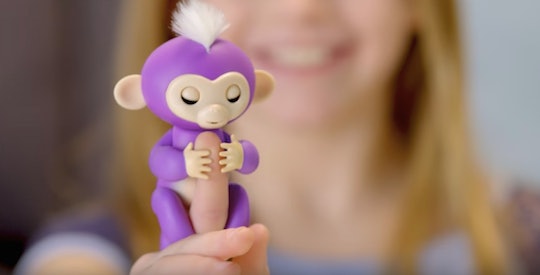 This Super Easy Hack Will Alert You When Stores Restock Fingerlings

Each holiday season, there's a new toy that takes the world by storm. This year, the hottest toy on the market is called a Fingerling, a battery-powered monkey that wraps around a child's finger and a responds to touch. Although the allure of Fingerlings might be lost on parents, kids are full-on obsessed with them and Fingerlings are pretty much sold out everywhere you turn. If you're wondering when will stores restock Fingerlings, I have a hack that will answer that very question.

Throughout the past couple of decades, there have been plenty of wildly popular toys that conveniently sell out before the holidays. If you've been keeping up with the latest trends, then you know parents have had to deal with Tickle Me Elmo, Furbies, and most recently, Hatchimals. It's almost like toy inventors are actively trying to break down parents — anyone that can pressure an adult person into scouring the earth for a robotic toy that speaks "Furbish" has to be an evil genius, right?

To add insult to injury, the popularity of these toys don't often make sense to parents. In the case of Fingerlings, the draw is that they're interactive. According to Business Insider, the Fingerlings "make sounds when you touch their heads or pet them. They can also grab onto fingers, play sets, and ordinary household objects. They even sing if you clap your hands twice." Based off of that description, it almost sounds like Fingerlings are the robotic versions of babies. Go figure.

The good news is Fingerlings aren't ridiculously expensive. According to Toys "R" Us, Fingerlings retail for $14.99, which is a decent price when you consider the original Furby retailed for about $35.

Given the reasonable price of Fingerlings, and the fact that they're super popular right now, it makes sense they're selling out an unbelievable pace. Toy industry analyst, Juli Lennett, said of the Fingerlings craze, according to Good Housekeeping:

It's brand new this year and it seems to be flying off the shelves. I think that [it] could potentially be one of the top toys for the holiday season.

If you're wondering how the heck you're going to procure a Fingerling in time for the holidays, I'm here to report there is hope for you yet. Your saving grace is called the zooLert, a literal toy tracker. According to zooLert's website, the free service "tracks hard to find, in demand products" aka coveted toys. If you're interested in the service, all you have to do is sign up. Once you're registered in the system, you'll then receive text and email alerts about the toy you're hunting. Yep, it's 2017, and parents are literally still stalking toys.

The best part is that the site is super easy to use. If you take a peek at the Fingerlings section of zooLert, you'll be able to see all the stores stocked with Fingerlings in one organized list that goes as far to categorize the available Fingerlings by color and name. Once a retailer restocks, you'll get a notification on your phone or email. If you're really dedicated, you can leave zooLert's tracker running on your computer. When an important update occurs, your computer will emit a bird, lion or rooster noise, based on your settings. The site updates every minute and zooLert's website advises parents that the computer tracker method is "even faster than TXT and email alert."

In short, the wonderful people at zooLert should be looking into careers at the NSA or CIA.

Now that you're armed with this hack, you should have a better chance at securing a Fingerling for your child. Although chasing after a new toy each year can be overwhelming and frustrating, there's nothing better than making your child happy, right? That being said, may the force be with you this holiday season.