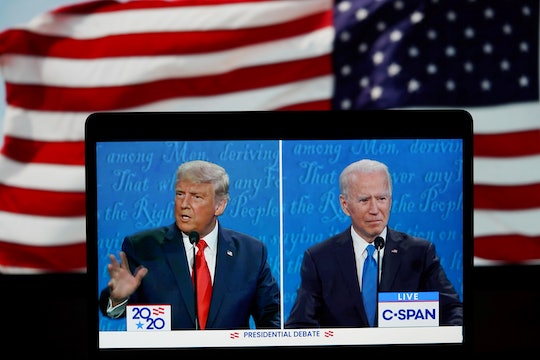 Will Donald Trump win another four more years in the White House or will Joe Biden be moving in to the people's house? Voters have been eager to cast ballots in the 2020 presidential election — as evidenced by the unprecedented early voter turnout seen in states across the country — and eager to find out who'll be their next president. But when exactly will we know who won the election? The truth is, we may not know who won by the morning after Election Day.

It's become increasingly apparent that this year's election is likely to be unlike any we've seen before. In many states, the ongoing coronavirus pandemic has changed how voters cast ballots. At least 30 states and Washington, D.C. have made it easier for voters to vote by mail in an effort to reduce the risk of COVID-19 transmission, according to ABC News. Those mailed ballots are exactly why results may take longer to tally in this election.

"There's going to be a lot more voting by mail this year because of the pandemic than there ever has been before — maybe close to half of all votes in the U.S.," NPR's Miles Parks said in a recent segment on voting. "But it's important to understand that counting mail ballots takes more time and more resources than counting in-person votes."

Mail-in ballots aren't merely opened and scanned. Election safeguards require officials to verify voters' signatures before opening envelopes, separating ballots from their secrecy sleeves, unfolding ballots, and sorting them so they can be tabulated via machine. And while none of the steps are particularly troublesome, the process becomes more time consuming the more ballots you have to sort through.

Part of the issue, according to NPR, is that rules for when officials can begin to count and process mail-in or absentee ballots vary from state to state. More than two-thirds of states allow mail-in ballots to be processed, sorted, and sometimes even counted weeks ahead of Election Day, according to Ballotpedia.

But others like Iowa, Michigan, Mississippi, New Hampshire, New York, North Dakota, Pennsylvania, South Carolina, Vermont, West Virginia, Wisconsin, and Wyoming don't allow officials to begin working on mail-in ballots until either Election Day or the day before. Some of these states — particularly Pennsylvania, Michigan, and Wisconsin — are expected to be major swing states in this year's election. Additionally, some states allow mail-in ballots to be postmarked as late as Election Day, meaning some votes won't get tabulated until days after voting has ended.

While Trump has attempted to characterize the delay mail-in ballots are likely to cause as evidence of "fraud," election officials have been cautioning voters against that claim for weeks. "You won't know the election result for weeks, months, maybe years after," The Washington Post reported Trump told reporters in late July. "Maybe you'll never know the election result. And that's what I’m concerned with. It'll be fixed. It'll be rigged."

The president repeated a similar claim during the first presidential debate in September, arguing, "This election is going to be a fraud like you've never seen. We might not know for months because these ballots are going to be all over."

Election officials, however, have sought to remind voters that while Election Day results are likely to be delayed, it won't be because of fraud. It'll be due to this year's unprecedented surge in mail-in ballots. So as eager as voters are to learn who'll occupy the White House next, it could take a number of days for the final results to be in.

Have you registered to vote yet? Click here to confirm your voice is heard in the 2020 Election.