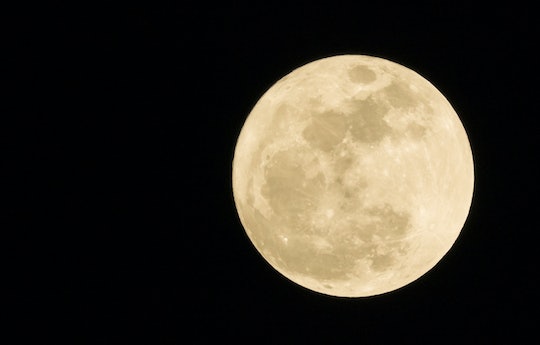 There's A Rare Super Blue Blood Moon On Jan. 31, & Here's Where You Can See It

Few things get me more excited than a good celestial event and a big one is coming. On Wednesday, there will be a "super blue blood moon," visible in much of the U.S. and you won't want to miss it. Here's how, when, and where to see the super blue blood moon, because it is a once in a lifetime opportunity.

A super blue blood moon is the combination of a blue moon (the second full moon in a month), a super moon (when the moon is brighter than usual when orbiting closest to the Earth), and a blood moon (when the moon takes on a reddish tint due to a lunar eclipse), according to the Guardian. What's more, this three-part moon lunar event has not been seen in 150 years — and likely won't come around again any time soon.

Many viewers in North America will be able to see the event. Gordon Johnston, program executive and lunar blogger at NASA Headquarters in Washington, said via the NASA website, “For the (continental) U.S., the viewing will be best in the West." Those of you interested in seeing the unique moon should, "Set your alarm early and go out and take a look.”

Those living in North America, Alaska, and Hawaii will be able to see the eclipse before sunrise, Johnson said:

Weather permitting, the West Coast, Alaska and Hawaii will have a spectacular view of totality from start to finish. Unfortunately, eclipse viewing will be more challenging in the Eastern time zone. The eclipse begins at 5:51 a.m. ET, as the Moon is about to set in the western sky, and the sky is getting lighter in the east.

For East Coast viewers, NASA reported that while the moon will enter the Earth's shadow at 5:51 a.m., it likely won't be very visible in the beginning:

So your best opportunity if you live in the East is to head outside about 6:45 a.m. and get to a high place to watch the start of the eclipse—make sure you have a clear line of sight to the horizon in the west-northwest, opposite from where the Sun will rise.

Viewers in the Central time zone will have an easier time viewing the moon, according to NASA. The reddish tint on the moon will be visible around 6:15 a.m., making that the best viewing time for this area. The Rocky Mountain region will have a peak view at 6:30 a.m., until the moon sets shortly after 7:00 a.m.

Unfortunately, not everyone will be able to see the super blue blood moon live. For those of you under cloud cover or out of viewing range, there are several live-streaming options available online. NASA is offering a live video of the moon starting at 5:30 a.m. Eastern Time, via NASA TV, and there will also be a webcast over at NASA’s Twitter account. NASA isn't the only source for live streams, though. The Slooh online telescope will have its own video starting at 5:45 a.m. ET, and Slooh experts will narrate the webcast starting at 7:00 a.m.

If live streams at the crack of dawn aren't your style, the Griffith Observatory will post a time-lapse video of the eclipse on its website and YouTube, allowing West Coasters to sleep in and still see the super blue blood moon on their own time. The observatory will also hold a viewing party.

Celestial events like this only come around once in a lifetime, so I would say that it's worth waking up a little early to check it out. But even if you're not in a prime viewing location, the numerous photos and videos of the moon are worth seeing as well. Happy viewing!

More Like This
Where Are The Toys Of Toy Story Today?
I'll Be First In Line To Vaccinate My Kids, But I'll Never Forget That We Were Last
Janet Jackson's Son Eissa Is A Little Musical Prodigy In The Making
Princess Charlotte Got So Excited To Shake A Royal Fan's Hand