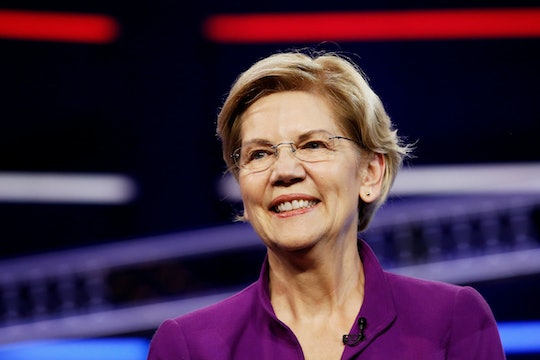 Elizabeth Warren's Humble Beginnings Are Helping Her As A Politician

I know we're in the very early stages of the Democratic presidential nomination race right now, but can we take a minute to appreciate Sen. Elizabeth Warren please? Warren was simply unstoppable at the Democratic primary debates in Miami, Florida on Wednesday night, which seems to have surprised some people who are new to Warren fandom. But for those who have followed the senator's career over the years, Wednesday night smacked sweetly of destiny. Because she's been working deep in the trenches for years. Of course, to get a real sense of the senator, we need to consider where Elizabeth Warren is from. Because our own history informs us, and if she hopes to be president, voters need to understand what has been informing her for her whole life.

Warren was born on June 22, 1949 in Oklahoma City, Oklahoma to Donald and Pauline Herring. She was the youngest of four children and the couple's only daughter. Her parents frequently struggled to make ends meet when she was growing up, with her father working as a maintenance man until he suffered from a massive heart attack when she was a child. That heart attack led to huge medical bills the entire family worked to pay, which Warren has said left her family living on the "ragged edge of the middle class" throughout her childhood.

On Wednesday night Warren opened up the Democratic primary debates by offering a passionate speech on one of her favorite topics: the middle class. She answered a question about the "strong economy" by noting that the American economy is strong only for a "thinner and thinner slice at the top."

Warren was the first person in her family to go to college. She taught elementary school and worked with children with disabilities for years before becoming a law professor with an expertise in bankruptcy and commercial law and how it financially hobbled women, the working poor, and the elderly. Throughout her career as a private citizen and a politician, Warren has made protecting the middle class from powerful corporations her life's work.

If you need proof? Please watch this video where Warren goes after Wells Fargo CEO Timothy Sloan for alleged misconduct.

All because she was once a 13-year-old girl working in her aunt's restaurant, trying to help her parents pay the bills. Her history has informed her. And now she's ready for it to inform the rest of us.