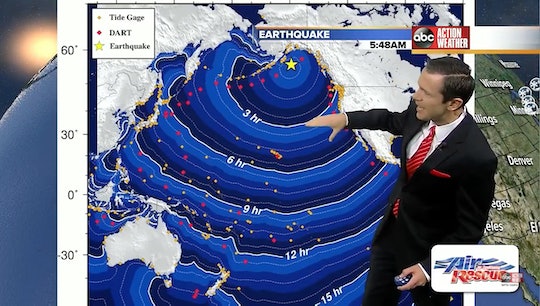 Early Tuesday morning, a 7.9-magnitude earthquake was recorded off the coast of Alaska — 173 miles southeast of Kodiak — at 12:21 a.m. local time (4:21 a.m. Eastern Time) reported BBC News. A tsunami warning immediately went into effect for the coasts of both Alaska and British Columbia in Canada. Additionally, a tsunami watch was issued for the U.S. West Coast. But where will the earthquake tsunami hit? As the U.S. National Tsunami Warning Center (NTWC) reported, any potential wave would hit the coasts of Washington state, Oregon and California within the first six hours after the earthquake, according to The Independent.

Update: The tsunami warnings have been canceled.

Previously: In Alaska, the warning advised residents to seek refuge on higher ground in affected areas, according to BBC News. And in several places near the Gulf of Alaska — including Homer, Seward, Kodiak, Sitka and Unalaska — people were told to leave. Kodiak police told the news network that water was reportedly receding from the harbor. "We have received two reports that the tide levels have been fluctuating in the channel six inches to one foot," police said. For several hours, it seemed like no one was quite sure what the impact of a potential tsunami would be. A travel time map (pictured below) was floating around Twitter to give West Coast residents an idea of when to expect a possible event.

Thankfully, no evacuations were necessary. That's because shortly before 8 a.m. Eastern Time, CNN reported that the tsunami alerts had been canceled "because additional information and analysis have better defined the threat," according to the National Tsunami Warning Center in Palmer, Alaska. (Apparently, only small tsunami waves of less than 1 foot were reported in Alaska, according to the center.) The publication also reported that San Francisco officials warned residents to stay away from coastlines for 12 hours.

Whew! Crisis averted. Still, for a while there, it was touch and go. I can't imagine what West Coast residents were feeling when they woke up to reports like this. (If they were even awake for the day yet, that is.) Granted, it's probably nothing compared to the terror people in Hawaii felt last week when they received emergency alerts of a ballistic missile threat.

Similar to the "jokes" of people shooting at Hurricane Irma — which unfortunately, many took seriously — some people used humor in the face of a potential tsunami. "I need everyone on the west coast to go steal ur dad's strap right now," one person tweeted. "If we all shoot at the ocean we can kill the tsunami." LOL. Right ...

Others sent messages of warning to loved ones who might have still been sleeping at the time the warnings went out. "I'm no meteorologist, but if you got friends on the west coast, I'd advise you to wake them up," another Twitter user wrote.

Still others saw the news and turned to religion. "We need to be praying HARD for North America right now," one person Tweeted. A man from British Columbia shared an update on Twitter, writing, "Let's pray for safety for all on the west coast of North America. Please pray for Port Alberni: we're in the tsunami warning zone. I got up over the mountain as son as I heard and in my car in Coombs at the moment."

While I'm glad a massive tsunami was avoided this time around, I still feel bad for everyone whose heart was racing this morning when they woke up to the emergency alert. It's always better for people be prepared for the worst-case scenario. But still. I'm sure West Coaster residents never thought their Tuesday morning would begin with a tsunami warning.