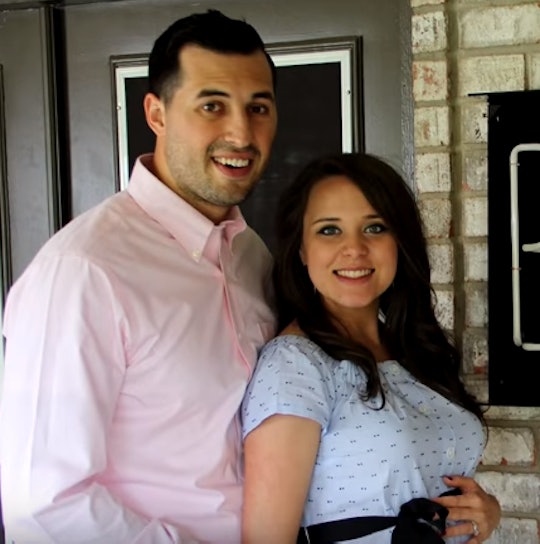 Two Duggar Sisters Were There For Jinger's Baby Birth

Jinger and Jeremy Vuolo welcomed their first baby, daughter Felicity Nicole Vuolo, on July 19. Jinger is the sixth child of Michelle and Jim Bob Duggar, the famous reality family from TLC's 19 Kids & Counting. so she is obviously pretty accustomed to new babies. But the reality of your own baby is far different from simply being around lots of them your whole life. Like all new moms, Jinger needed some support when she welcomed her little girl. And she certainly has a big enough family to fill the bill, but which Duggars were there for Jinger's baby birth?

Jinger and Jeremy moved to his hometown of Laredo, Texas, after getting married in November 2016, far from the Duggar family compound in Tontitown, Arkansas. Jeremy is a pastor in Laredo and Jinger seems to be enjoying her life as a newly minted Texan these days. But when it came time for her to give birth, she told Us Weekly that she was feeling pretty grateful to have some family members head on over to Texas to support her as she became a first-time mom; "I have been so thankful to have so much great help around me, giving me time to rest and recover."

While Jinger has loads of sisters and brothers who would have presumably been happy enough to show up to lend a hand, her two sisters Jana Duggar and Jessa Seewald were the ones who flew into Laredo to be there for her. Which makes sense, of course. Jessa Seewald and her husband Ben were the people who first introduced Jeremy and Jinger, and Jessa has already given birth herself twice. She's mom to two sons, 2-year-old Spurgeon and 1-year-old Henry. And it looks like she brought at least one of those sons to Texas with her; Jeremy Vuolo shared a sweet picture of Spurgeon on Instagram, petting a cat and clutching a soccer ball.

As for Jana Duggar; she is still single and has not had any children yet, but she has worked as a midwife assistant before. Which would make her invaluable to Jinger as she was giving birth. Although to be honest, she gave birth at a hospital in San Antonio, so I'm thinking her sisters were there more for moral support than anything else.

Duggar sister Jill Dillard didn't appear to be in Texas for the birth, which seems sort of surprising considering she is reportedly an actual midwife. But to be fair, she also has two children at home and might not have been able to make the trip. Let's maybe avoid reading any more into her absence than that.

Besides, Jana and Jessa were more than enough help, along with mom Michelle Duggar who also apparently arrived when baby Felicity was born. Not only were they there for moral support, they also completely helped to design Felicity's nursery, as Jinger told Us Weekly:

They ran a few ideas by me and we all decided on a Southwest theme. It seemed fitting given that we live in warm, sunny Laredo, Texas!

Jinger and Jeremy both seem super excited to welcome their first baby together. And having family on hand to do simple things like take care of the baby while you shower or nap or whatever is obviously indispensable. I guess having a huge family like the Duggars has some pretty impressive benefits. Like when you have your own baby, chances are there's always going to be someone around who is willing to drop everything and come help you. Even if you moved out of state... it's nice to know someone will be there for you.