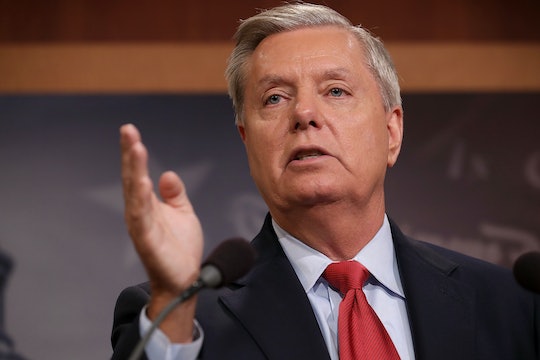 Here Is The Contact Info For Senators Supporting The Obamacare Repeal

On Monday, Kellyanne Conway took to Fox News' Fox & Friends to claim that the new Obamacare repeal, led by South Carolina Sen. Lindsey Graham and Louisiana Sen. Bill Cassidy, is "gaining in support and steam" in the Senate, according to Politico. For the millions of people who depend on the Affordable Health Care Act for health insurance, Conway's update about Cassidy and Graham's repeal efforts, aka the Graham-Cassidy bill, is unsettling. Given what's at stake if the Graham-Cassidy bill passes in the Senate (devastating cuts to Medicaid, higher premiums for sick patients, and the loss of essential services, according to Forbes), it's important to know which senators support the new Obamacare repeal before it possibly goes to vote.

When Trumpcare failed to pass in July, Graham quickly assembled support for what would later become the Graham-Cassidy bill. The bill, which is in essence a repackaging of Trumpcare, would provide block grants to states, allowing each state to spend money on health care as it sees fit, according to Center on Budget and Policy Priorities.

Graham said of the bill's plans, according to Vox:

Instead of a Washington-knows-best approach like Obamacare, our legislation empowers those closest to the health care needs of their communities to provide solutions. Our bill takes money and power out of Washington and gives it back to patients and states.

Although Graham is trying to present a model of flexibility with the bill, he's leaving out some very important information. For example, the bill "would cause many millions of people to lose coverage, radically restructure and deeply cut Medicaid, and increase out-of-pocket costs for individual market consumers," according to the Center on Budget and Policy Priorities.

Despite the vast and devastating pitfalls of the Graham-Cassidy bill, however, it does have the support of many key Republican senators, including Nevada Sen. Dean Heller and Wisconsin Sen. Ron Johnson, according to Business Insider.

Arizona Sen. John McCain has also voiced support for the Graham-Cassidy bill, which is interesting given that he famously voted against Trumpcare in July.

On Sept. 6, McCain released the following statement, according to Vox:

While I support the concept of the Graham-Cassidy proposal, I want to see the final legislation and understand its impact on the state of Arizona before taking a position.

Cassidy said of the bill's growing support, according to the Washington Examiner:

I'm confident we'll get there on the Republican side. People are coming out and saying they are for it, either publicly or privately.

Cassidy also went on to tell the Washington Examiner that he had the support of about "48 or 49" senators, just a few members shy of the 50 votes needed to move the bill forward. According to Forbes, Senate Majority Leader Mitch McConnell is working overtime to give the bill a passing Congressional Budget Office score before it goes up for vote. Per Reconciliation rules, the "Senate must pass any Obamacare replacement for the fiscal year 2017 by September 30," according to Forbes.

As for Republican senators who have denounced the bill, Kentucky Sen. Rand Paul has repeatedly bashed the latest repeal effort on Twitter:

Despite Paul's criticisms, the majority of Republicans seem optimistic that the Graham-Cassidy bill will go up for vote in the Senate. On Friday, House Speaker Paul Ryan said of Cassidy and Graham's efforts, according to the Washington Examiner:

I just came from lunch with Ron Johnson here in Madison an hour ago. He's pretty optimistic that they may be able to resuscitate this issue. I spoke with Lindsey Graham this morning. There's this Graham-Cassidy bill that I actually think has some real promise and potential.

All of the enthusiasm from Republican senators and leaders is undoubtedly scary for the countless Americans that would be hurt by this bill. For many, the repeated efforts to repeal the Affordable Care Act is emotionally exhausting, to say the least. Although it might be mentally daunting to continue to this never-ending fight, worried Americans should reach out to Republican senators to express their concerns. To take action yourself, below you'll find the list of senators who support the bill, in addition to their contact information:

More Like This
Here’s How To Fight For Abortion Rights
On Father’s Day, Here’s How To Support A Dad Who Has Lost A Child
15 Juneteenth Shirts For Kids To Express Their Pride & Support
Honor Juneteenth With These Powerful Quotes