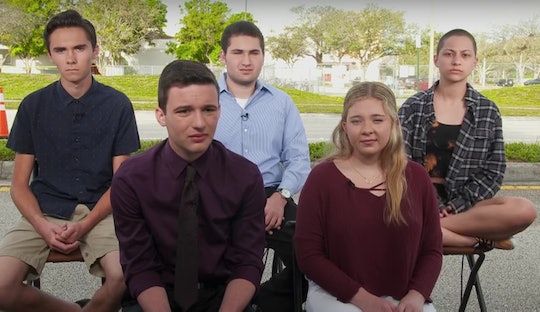 Here Are The Faces Behind The March For Our Lives

The devastating shooting in Parkland, Florida, is the latest in a string of outbreaks of gun violence across the U.S. Many believe that officials have failed to act in response to the numerous tragedies and now the victims are taking things into their own hands. Who are the March For Our Lives organizers? These high school students are letting the world know that enough is enough.

The upcoming march on Washington was organized by five student survivors of the Parkland shooting — Jacqueline Coren, Emma Gonzalez, Cameron Kasky, David Hogg, Alex Wind — along with school staff, members of the Parkland community, and a nonprofit. The march is planned to begin at 10:00 a.m. Eastern Time on March 24 and organizers are anticipating a crowd of 50,000 attendees and protesters, according to The Washington Post, including big names like George Clooney and "student speakers, musical performers, guest speakers, and video tributes."

This group of organizers have spoken out numerous times about the motivation behind their movement, calling for action. Kansky, a junior, spoke with CNN about the need for such a movement. "We are losing our lives while the adults are playing around," he said. He and his fellow students are out to make a statement.

The student activists appeared on Face the Nation, where they spoke in depth about the goals that they hope to achieve and how the march plays into the bigger movement. In that interview, Wind explained that they are just getting started making change:

March For Our Lives is a movement "created by, inspired by, and led by students across the country who will no longer risk their lives waiting for someone else to take action to stop the epidemic of mass school shootings that has become all too familiar," according to its website. Gonzolez explained during an interview with ABC News’ This Week that another goal of their march is inclusion — it's not just about those who were lost in Parkland. "The kids who need to take part in this are kids, everyday kids just like us," she said. "All students should realize that a school shooting could happen anywhere."

Along with students and community members, the nonprofit organization Everytown for Gun Safety is helping organize the march. The organization is dedicated to bringing awareness to every community, according to its website:

Everytown is a movement of Americans working together to end gun violence and build safer communities. Gun violence touches every town in America. For too long, change has been thwarted by the Washington gun lobby and by leaders who refuse to take common-sense steps that will save lives.

Along with the students and Everytown, concerned parties across the country are organizing sister marches for the same day and time. Organizers have asked that sister march events be posted to the official March For Our Lives Facebook page to keep track of satellite marches across the U.S. There are currently marches planned in Los Angeles, Chicago, Miami, Las Vegas, and many more cities.

You, too, can get involved in the movement even if you can't make it to Washington. By joining or planning a march in your local area, you can show your support for victims and survivors. I have a feeling that change is on the horizon. The Parkland student organizers and their growing following are just getting started.