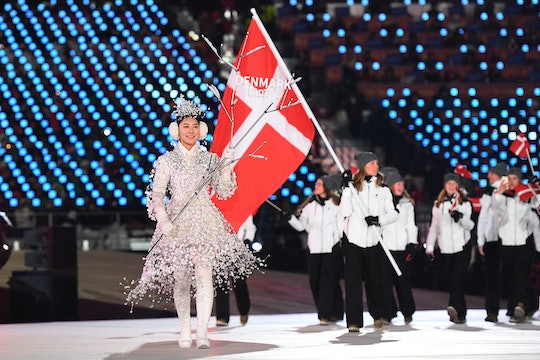 When the opening ceremony for the 2018 Winter Olympics began in the wee hours of Friday morning stateside, the people of South Korea were clearly happy to share their national pride. From the white tiger officially opening the games, to the music, and the general sense of magic, it was a stunning display. And many people watching wondered who the women walking with the countries at the opening ceremony might be. Because they looked absolutely stunning.

The entire opening ceremony of the 2018 Winter Olympics was something to behold. A shiny, mystical dance that beautifully represented the country of South Korea. In front of 35,000 spectators who packed the PyeongChang Olympic Stadium, children sang, women in traditional white dresses swirled about the stage, and a pretend "dove" was released amid a million lights. It was unique and magical. But perhaps one of the more magical elements were the South Korean women dressed like snow queens straight out of Narnia who lead the athletes of the world into the stadium. In these amazing costumes that looked like intricate lace trees with perfect branches over full-on white pant suits (I feel certain that Hillary Clinton would be especially into these outfits, being a pant suit aficionado herself).

The outfits also included what looked to be a sparkly crown that almost looked to be made of silver branches; yes, they were that magical. And they also managed to pull off earmuffs, which couldn't have been easy considering they were also wearing crowns. I mean honestly, have you ever seen anyone wear earmuffs and a crown? I feel like it's usually an either/or situation.

I'm happy they were wearing ear muffs, considering these Winter Games in PyeongChang are predicted to possibly be the coldest in recorded history. Hopefully their amazing-looking costumes had some sort of high-tech heating system inside them like the coats Ralph Lauren created for the U.S. Olympic team. Happily they are also wearing mittens and tall white boots that look like they're made for walking, a la the song by Nancy Sinatra.

The women were responsible for walking the athletes from each country out into the PyeongChang Olympic Stadium during the opening ceremony. They proudly carried the name of each country on cool branches (except for the Russian athletes — after the doping scandal, many Russian athletes were not allowed to attend and the ones who did simply followed the Olympic flag into the stadium). Still, the woman who lead these athletes out carried yet another cool-looking branch with the words "Olympic athlete from Russia," complete with an unperturbed smile.

As these otherworldly women lead the flag bearers and athletes for each country, they didn't seem to seek any glory for themselves. Not much is known about them: why they were chosen for the honor or what their official role might be. Instead, they all proudly walked out in their ethereal garb, setting the stage for South Korea and doing their country proud in shades of white, silver, and pink.

As everyone settles in for the next two weeks to watch the best athletes from around the world compete in events like alpine skiing, hockey, and figure skating, I hope people don't forget these snow queens. The women who truly raised the bar for pageantry during the 2018 Winter Olympics in PyeongChang. Silently walking through the stadium, followed by hundreds of athletes, wearing dresses that looked like they were made for characters in Lord of the Rings or something of the like. I wasn't all that excited for the Olympics before, but there was just something about these snow queens... I'm excited now.