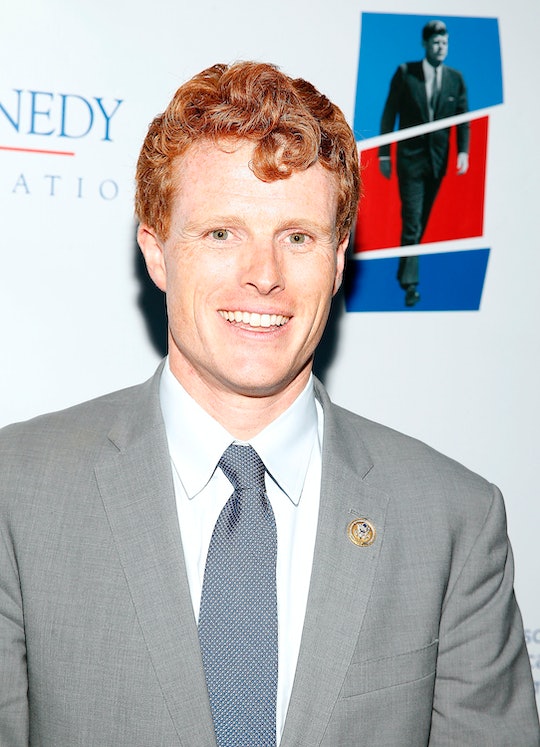 Democrats Choose Joseph Kennedy To Give SOTU Response, But Not Everyone Is Happy About It

President Donald Trump will give his first-ever State of the Union address to Congress Tuesday, and the eyes of the nation will be on him as he delivers the important speech just over one year after the most contentious election in U.S. history and his 2017 inauguration. But it turns out that it won't just be an important event for the POTUS: on Friday, House Democratic Leader Nancy Pelosi and Senate Democratic Leader Chuck Schumer announced their party's pick to deliver the official response. Who is doing the Democratic response to the State of the Union? Democrats have chosen Massachusetts Rep. Joseph Kennedy III, a 37-year-old, three-term congressman Pelosi and Schumer described as "a relentless fighter for working Americans," who "profoundly understands the challenges facing hard-working men and women across the country."

For Kennedy's supporters, the announcement is a big deal — his speech will be the highest-profile public appearance of his entire political career, according to Reuters, and may allow him not just to position himself for a future Senate run, but also to be viewed as a much-needed, next-generation Democrat able to connect with younger voters. It definitely helps that he's emerged as a vocal advocate of the Affordable Care Act — he rose to prominence last year after criticizing the GOP repeal effort, according to BBC News —and he's also spoken out in support of LGBTQ and immigrant rights. Yet on social media, the response was clearly mixed, with many people feeling particularly frustrated that the job went to yet another white man.

To be fair, much of the criticism of the Dems' pick had little to do with Kennedy himself — he actually seems pretty well liked — and much more with the fact that it seemed to be a major missed opportunity on behalf of the party to show an interest in advancing more diverse future candidates. After all, Kennedy isn't just white and male, he also hails from the prominent Kennedy political dynasty: according to The Huffington Post, he's the son of former Massachusetts Rep. Joseph Kennedy II, the grandson of former attorney general Bobby Kennedy, and the great-nephew of both President John F. Kennedy and Massachusetts Sen. Ted Kennedy.

Then there's also the fact that choosing Kennedy seems to ignore both promising non-white politicians, as well as the female Democrats who have emerged as rallying voices during a year in which women have mounted an incredible and very much-needed pushback against discrimination, abuse, and patriarchy. As a number of Twitter users aptly pointed out, even if Kennedy is a great politician with a promising future in leadership, there are still other female politicians whose voices are incredibly valuable and deserve to be elevated (think California Sen. Kamala Harris, who's had a seriously incredible year):

At the same time though, some have noted that, well, delivering the State of the Union response isn't exactly an easy thing to do — and, in fact, it could have some unintended negative consequences for Kennedy's political future (Florida Sen. Marco Rubio, for example, may not have been so pleased to have been picked after his awkward water bottle incident in 2013). So with so many rooting for Harris in 2020, some thought it might actually not be such a bad thing that she didn't get the job:

Still, Kennedy appears to be a very likeable candidate overall, with a message that definitely seems to be resonating. And while many Democrats aren't exactly feeling the idea of having a Kennedy family golden boy as the face of their party, they certainly don't seem opposed to have him play a supporting role:

Either way though, it seems pretty clear that Trump's State of the Union address will be an incredibly important moment for Kennedy, and that everyone will be waiting to hear — and analyze — everything he has to say in response. And given that Trump's first year in office has been filled with controversy, protest, and an awful lot of voter outrage, it seems he'll likely have a lot to talk about.