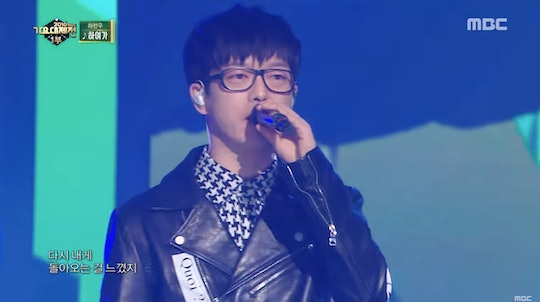 Who Is Ha Hyun-woo? The Opening Ceremony Performer Is An Indie Rock Star

The opening ceremony of the Olympics always marks the official start of the games with some pomp and circumstance, and the opening ceremony of the 2018 PyeongChang Olympics will be no different. Airing on February 9, the celebration will feature several nods to the country hosting it, with Korean musicians like Ha Hyun-woo performing. But, for those not familiar with the Korean music scene, you may be wondering who Ha Hyun-woo is?

Ha Hyun-woo is the lead vocalist of the indie rock band Guckkasten, and also appeared on the Korean singing competition show King of Masked Singer. On the show, performers wear masks so they can show off their voices without giving away their identities, allowing their talent to shine and not swaying listeners because of external factors. Ha Hyun-woo won the competition nine times in a row, setting the record for most wins on the show. With his vocal skills, he'll be sure to succeed at the Olympics opening ceremony, too.

On Jan. 30, Soompi reported the confirmation from Ha Hyun-woo's agency that he would be appearing, quoting Interpark INT as saying, "Ha Hyun-woo will be taking the stage as a solo vocalist." However, he won't be the only one stepping up to the mic that day, as Ahn Ji Young, Jeon In Kwon, and the band Deulgukhwa will also perform, among others. According to Soompi, it's all about allowing multiple generations of Korean music to shine.

Ha Hyun-woo has been the lead singer and guitarist of Guckkasten for well over a decade, though the band has gone through some permutations in that time. Originally forming in 2003 under the name The C.O.M., they disbanded shortly thereafter. When they decided to give it another go in 2007, the band was renamed Guckkasten after the German word for zograscope, an optical device that adds depths to pictures. According to IMBC, it was meant to reference a Chinese kaleidoscope and the psychedelic influence on Guckkasten's music. Their most recent album, Stranger, dropped in 2017.

Ha Hyun-woo also had an interest in art, which he studied in school. In an interview with The Musician, he said that when he was younger, he thought about becoming a cartoonist or costume designer, but dedicated himself to music after forming a band in college. It seems he's been going strong in that field ever since, and King of Masked Singers definitely boosted his popularity.

The artistic element of the Winter Olympics opening ceremony will start off with R&B artist Insooni singing "Let Everyone Shine," which is the official song of the games. The other artists will follow. The executive creative director of the PyeongChang ceremonies said in a news conference, as reported by Reuters, that "peace" was the theme of the evening and they had "worked on all of our scenarios" under that theme.

The Telegraph indicated that the program will likely follow the usual schedule of past opening ceremonies. Like the last Winter Olympics in Sochi, Russia, that means the PyeongChang opening ceremony would include a parade of participating athletes, swearing of official oaths, and some important symbolic moments — namely, raising the Olympic flag, lighting the Olympic flame, and releasing some Olympic pigeons (okay, the branding probably doesn't actually extend that far).

However, the icy temperatures of February in South Korea could complicate things. According to The Telegraph, ruling party politician and PyeongChang local Yeom Dong-yeol said, "The cold could ruin the entire opening party. The fate of the event is down to the mother nature."

Hopefully, the frigid weather doesn't totally spoil the exciting events of the the day and all of the musical artists will get a chance to perform without shivering too much. Maybe they can layer on the sweaters and keep their fingers crossed for the best.