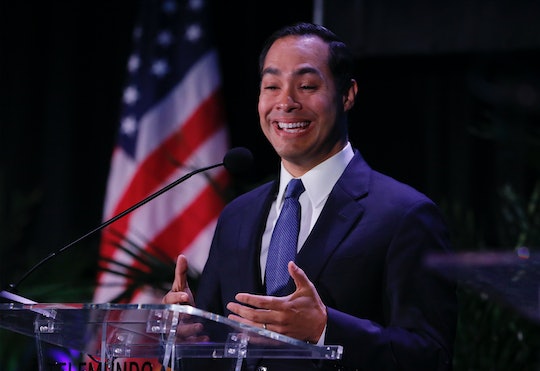 Julian Castro Is The Democrat Everyone Is Talking About Post-Debate

During the first Democratic Debate ahead of the 2020 election, many politicians took the stage to discuss hot topics. One candidate in particular, Julian Castro, really made waves on social media after making some incredible statements throughout the conversation. But many of you might be wondering: Who is Julian Castro? The democratic candidate is not new to politics at all.

Castro, 44, is the former U.S. Secretary of Housing and Urban Development under Barack Obama's administration from 2014 to 2017, according to Ballotpedia. Prior to his secretary position, Castro served as the Mayor of San Antonio, Texas for five years. According to the site, Castro's term as mayor came four years after an unsuccessful run for the role in 2005. It was on Jan. 12, 2019 that Castro announced he would be running for President of the United States, as reported by CNN at the time. The report noted that Castro has been considered a "rising star" within the Democratic Party since he delivered the keynote speech for Obama at the 2012 Democratic National Convention.

Now, Castro is being considered a rising star among the general public after a strong presence throughout Night One of the first Democratic Debate on June 27, 2019.

Castro's platform is heavily built on immigration because he himself is a second-generation immigrant, according to The Atlantic. In 1922, Castro's grandmother, Victoria Castro, crossed into the United States from Mexico after her parents were killed during the Mexican revolution, CNN reported. Victoria was born and raised in Coahuila, a Mexican border state, before crossing into Eagle Pass, Texas, according to the report.

"It's time our nation's immigration system reflect the collective values that we all share  —  equality, fairness, justice, and compassion. It's time that we recognize that protecting our borders and treating immigrants with compassion are not mutually exclusive," Castro wrote on Medium in April 2019 when unveiling his extensive immigration plan.

According to Castro's post, his immigration plan involves creating a humane and secure border, a pathway to full citizenship, and reversing the Muslim ban, just to name a few.

Something else you need to know about Castro: He has a twin brother. Castro's identical twin, Joaquin Castro, is also into politics and currently serves as a Democratic congressman in Texas, according to NBC News. The report noted that Castro is actually one minute older than Joaquin, though you obviously can't tell by looking at them side-by-side.

Interestingly, Joaquin was the first person to confirm Castro would be running for president. The confirmation came during a joint appearance on The Late Show in Dec. 2018, as the NBC News report noted. Though the late night show's host, Stephen Colbert, pushed Castro to reveal his political plans throughout the appearance, it was eventually his twin, Joaquin, who let the cat out of the bag.

As of the date of this article, Castro is the only hispanic presidential hopeful for the 2020 election. If elected, he would not only be the first hispanic President of the United States, but also the first to have an identical twin.