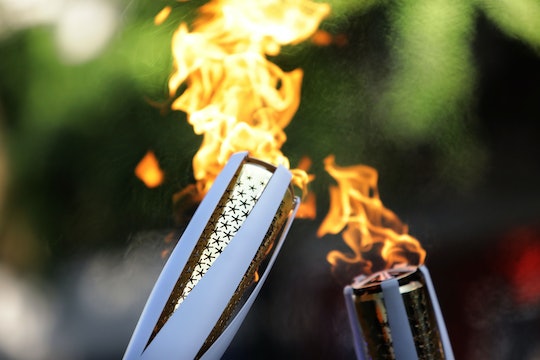 Who Is Lighting The Torch At The Opening Ceremony? Their Identity Is Being Hidden

In just a few days, the Olympic flame will make its way to PyeongChang, South Korea for the opening ceremony of the 2018 Winter Olympics. Thousands of runners will carry the Olympic torch through nine provinces and eight major cities on the Korean peninsula before making its last stop in PyeongChang. So who is lighting the torch at the opening ceremony on Friday? The name of the final torchbearer is being kept secret for now.

Officials have not released the identity of the person who will light the cauldron during the opening ceremony of the 2018 Winter Olympics, according to USA Today. But many Olympic fans have speculated on social media that the final torch bearer may be a well-known and respected Korean who embodies the message of peace, which symbolizes this year's Olympic Torch Relay, the most iconic and symbolic of all Olympic events.

The 2018 Olympic Torch Relay kicked off on Oct. 24 at the Temple of Hera in Olympia, Greece, where the flame was handed to the first torchbearer in front of Olympic officials. Come Friday, the torch will have traversed more than 1,250 miles and have passed through the hands of 7,500 runners representing 75 million South Koreans, according to the officials 2018 Winter Olympics page.

The theme for this year's Olympic Torch Relay is "Let Everyone Shine." The slogan is meant to represent a message of peace, which has defined the 2018 Winter Olympics in PyeongChang. In that way, this year's Olympic Games is historic: For the first time in Olympic history, athletes from North and South Korea will march together under one flag — the Korean unification flag — for the opening ceremony on Friday, and will compete as one team, according to TIME.

South Korean President Moon Jae-in told lawmakers in October that the 2018 Winter Olympics is a "'golden opportunity' to strengthen peace" between the two countries, according to USA Today. He added,

Ensuring the success of the Pyeongchang Winter Olympics and Paralympics that are 100 days away is a national task.

The diplomatic decision did cause some controversy in the two countries when it was announced earlier this year, TIME reported. A Jan. 11 survey released by the office of the South's National Assembly Speaker and SBS television network, for example, found that more than 70 percent of South Koreans opposed joining teams with North Korea, according to Reuters; conversely, more than 80 percent said they welcomed participation from the North in general.

The 2018 Olympic Torch Relay is expected to have last 109 days when it reaches PyeongChang on Friday. Runners in Greece passed the torch over the course of eight days before it entered Korea on Nov. 1 for the last leg of the journey. The Olympic torch stopped in Seoul on Jan. 13 for a four-day relay through South Korea's capital city, according to Al Jazeera.

In addition to representing unity, Korean officials also want the PyeongChang 2018 Olympic Torch Relay to showcase the "heart-felt stories that will inspire others," according to the official Winter Olympics site. Thirteen days of the 101-day Olympic Torch Relay in South Korea will have been spent promoting the "Relay for Everyone" program, which, the site stated, "aims to promote values of ‘compassion and respect’, and to ignite the flame of ‘hope and determination’."

The 2018 Winter Olympics in PyeongChang, South Korea is a highly anticipated event unlike any other, so it'd be interesting to see who officials have chosen to mark the opening of the games. Whoever they have picked, though, will have an awesome responsibility on their hands, not only in lighting the cauldron, but delivering a message of peace.