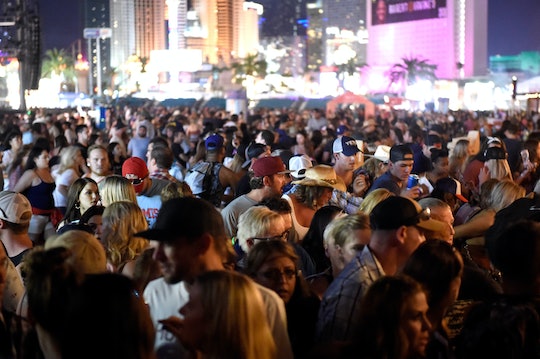 As information continues to be released regarding what is now the deadliest mass shooting in modern U.S. history, those of us feeling helpless, angry, and afraid are looking for the helpers. And as stories of everyday heroes emerge from the ashes of a shooting that killed more than 50 people, and injured more than 500, one such helper has made himself known. So, who is Mike McGarry? The 53-year-old financial advisor from Philadelphia was just another concert-goer on Sunday night, enjoying the last evening of Route 91 Harvest Music Festival festivities, when terror struck. Again.

Before 10:08 p.m. Las Vegas time, Jason Aldean was putting on a seemingly normal country music performance on the closing night of the three-day music festival. According to an update released by the Las Vegas Metropolitan Police Department (LVMPD), an estimated 22,000 people were in the crowd when the 64-year-old shooter (who has since been identified by local authorities but whose name will not be repeated by this publication) opened fire from the 32nd floor of The Mandalay Bay Hotel and Casino with an illegal automatic weapon. After re-loading an estimated three times, according to CNN, the shooter killed himself before LVMPD SWAT entered the room.

In the midst of all the chaos and carnage, McGarry emerged, doing what can only be described as nothing short of heroic in order to save the lives around him.

According to Reuters, McGarry was at the concert when the shooting started. In an interview, McGarry described what happened, as well as his response to the chaos. His account is not only heartbreaking, it is brave. It is inspiring. It is indicitive of a reality that never should have been; one where, according to Newsweek, 244 mass shootings happened in the first 240 days of 2017.

Reuters, in their continued coverage of the shooting, made note that the back of McGarry's shirt was covered in footmarks. "People ran over him in the panicked crowd."

We, as citizens of the greatest country in the world, have become so accustomed to deadly acts of gun violence, and McGarry's actions in the middle of so much death and chaos — his natural response to save the lives of the young because, according to him, 53 years on this earth is enough when faced with a choice between living or dying to save someone else — is a devastating reminder that we must all, collectively, do better.

According to Newsweek, Las Vegas gun laws allow for open carry, concealed weapons, and machine guns. In fact, it's safe to say that Las Vegas has "some of the most relaxed gun laws in the country." According to the National Rifle Association (NRA), Las Vegas allows for the following:

Nevada law does not require firearms owners to have licenses, register their weapons, or limit the number of firearms an individual possesses. Automatic assault weapons and machine guns are also legal in the state as long as they are registered and are possessed in adherence to federal law.

Las Vegas Metropolitan Police Sheriff Joseph Lombardo says the shooter had a cache of firearms in his hotel room, including 10 rifles. Las Vegas does, according to Newsweek, "prohibit the transfer or possession of assault weapons, 50 caliber rifles or large capacity ammunition magazines."

As a mother — and as a human being — I cannot fathom what McGarry, or anyone else in the crowd during the shooting, must have thought and felt. I can simply assume that McGarry's life, all 53 years of it, flashed before his eyes in those moments and when he laid on top of 20-year-old young adults in order to spare their lives. I can only say that deciding between your life, and the lives of those around you, while you attend a country music concert shouldn't be a thing that happens in the United States.

If we truly are the greatest country in the world, then surely we, as a nation, will not require the sacrifices of "helpers" like McGarry. Surely we can stop leaning on the now-famous quote from Fred Rogers: "When I was a boy and I would see scary things in the news, my mother would say to me, 'Look for the helpers. You will always find people who are helping.'" Surely.