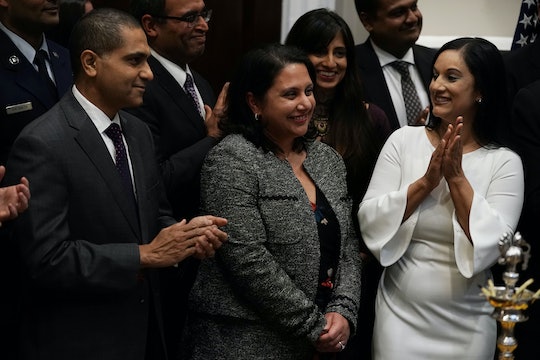 Why People Have Concerns About Neomi Rao, Trump's Pick To Replace Brett Kavanaugh

This week marks yet another important moment in American politics, as a new justice may be taking on the D.C. Circuit Court of Appeals. And it may have some wondering: Who is Neomi Rao? As it stands, many have concerns about President Donald Trump's pick to replace recently appointed and highly controversial Supreme Court Justice Brett Kavanaugh.

In November, during the Diwali ceremonial lighting of the Diva at the White House, Trump announced that he was nominating Rao, who is currently an administrator at the Office of Information and Regulatory Affairs, to replace Kavanaugh's former position on a lower court, as CNN reported. Of course, given Kavanaugh's sordid history, the selection wasn't going to come without some speculation. Despite being a woman herself, multiple news sources have uncovered that Rao has made very concerning statements regarding consent and sexual assault in the past.

Currently, Rao serves not only in the Office of Information and Regulatory Affairs, but she is also a former professor of structural constitutional law, administrative law, and legislation and statutory interpretation at the Antonin Scalia Law School at George Mason University, according to The Federalist Society. In addition, according to Scalia Law School, her comparative analysis has been utilized in constitutional law across the United States as well as abroad.

Her experience with government is long: she began serving as an Associate Counsel to President George W. Bush, and has clerked for Judge J. Harvie Wilkinson III on the U.S. Court of Appeals for the Fourth Circuit and for Justice Clarence Thomas on the U.S. Supreme Court, the National Review reported, adding that she has a B.A. from Yale University and Juris Doctorate from the University of Chicago,

However, despite her credentials, she doesn't have a spotless past when it comes to certain social justice issues, coincidentally, the same that landed Kavanaugh in hot water last year.

For instance, in her college newspaper while she attended Yale, as NPR reported, Rao wrote a comment about women and consent to sexual intercourse, stating that, if a woman gets to the point of unconscious inebriation, she should take responsibility for having "reached that point" herself. According to NPR, she wrote, "If she drinks to the point where she can no longer choose, well, getting to that point was part of her choice."

Additionally, as HuffPost uncovered, while at Yale, she also denounced "special treatment for minority students," suggesting that they were given an unfair advantage when the school was governed by "ethnic deans," later saying that she thought multiculturalism was trying to "undermine American culture." In addition, in 1994, she also commented that she thought the LGBTQ rights movement was just a "trend."

However, not everyone thinks she should be held completely accountable for what she said when she was younger, a notion that sounds startling similar to what Kavanaugh apologists might say.

According to NPR, Justice Department spokeswoman Kerri Kupec argued Rao would be "an exemplary judge," arguing that she's "a renowned constitutional and administrative law expert."

Kupec continued, as NPR reported, "The views she expressed a quarter-century ago as a college student writing for her student newspaper were intentionally provocative, designed to raise questions and push back against liberal elitism that dominated her campus at the time."

Others, however, disagree, believing that her past sentiments could actually set a precedent for how she'll govern now. As NDTV reported, Vanita Gupta, the CEO of The Leadership Conference on Civil and Human Rights, said "her past is her prologue," adding: "Rao's demonstrated hostility to the civil and human rights of all should disqualify her from a lifetime appointment on the federal judiciary. We urge all senators to reject her nomination."

Additionally, many have voiced their opposition to her nomination — hearings will begin today, Feb, 5, according CBS News — on Twitter.

Sen. Mazie Hirono tweeted: "Neomi Rao has no experience litigating in federal court, but she’s been nominated to the DC Circuit."

The NAACP tweeted, "Our civil rights are in danger."

Regardless of whether you believe that Rao's prior statements were just the product of naivety, youth or lack of education, or perhaps more startlingly a candid and honest perspective on how she views rape, assault, consent and women's rights, staying informed is of the utmost importance right now.