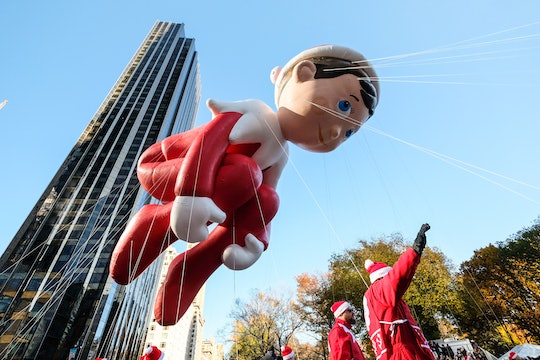 Watch For These Performers At The Macy's Thanksgiving Day Parade

Few things are more enjoyable on Thanksgiving morning than waking up to the smell of a turkey cooking, grabbing coffee, and sitting down to watch the parade. But one of the best parts of the parade is getting to see and hear from so many talented performers. So, who is performing at the Macy’s Thanksgiving Day parade?

The lineup this year appeals to all ages as 20 performers spanning the generations are scheduled. Diana Ross is set to headline on a float celebrating the holiday movies from the Hallmark Channel, according to the parade’s website. She's listed on the site as "Diana Ross and family," and there are reports that she'll be joined by her daughter, Tracee Ellis Ross, and grandson, Evan Ross, as iHeart Radio reported.

Fresh into her solo career after performing as a member of Fifth Harmony, Ally Brooke will perform, plus crowd-favorite Pentatonix, according to Macy's. You'll also see Ella Mai, Leona Lewis, and Jack and Jack will pass by, along with Tegan Marie, Mackenzie Ziegler and Johnny Orlando, Bazzi, and The Voice winner Brynn Cartelli.

And that’s just the singers! Of course, no parade is complete without special performance groups and marching bands and this one is no different. The NYPD will again provide its band and Macy's has pulled together the nation’s best high school performers for the Macy’s Great American Marching Band. Ohio State University’s band will be on display along with two other college-level bands and seven bands from America’s high schools. The Homewood Patriot Band from Alabama, currently the largest band in the state, will be bringing its 400 members for its eighth appearance in the parade.

Three performance groups are set to appear in the parade, including Fred Astaire Dance Studios, the Spirit of America Dance Stars, and Spirit of America Cheer group. WRAL also reported that performers from Legacy Dance Productions from Zebulon, N.C. are making the trip to New York City to take their place in the parade.

Spongebob, the Grinch, and Toothless the dragon are just a few of the 25 balloons that will grace the parade route, along with another seven "ballonicles" that will move along on wheels. Viewers will catch 31 floats, led by the longest-running float, Macy’s Tom Turkey. Fun fact: the balloons that are in the parade nowadays replaced real-life zoo animals that were in the first parade in 1924, but which scared some of the younger members of the crowd lining the parade route, according to How Stuff Works.

The parade runs from 9 a.m. to noon, Eastern Time, but USA Today noted that people start arriving as early as 6 a.m. to get a good view. Luckily for most of us the view will be warm and unobstructed on our couch as we watch amidst Thanksgiving Day preparations. NBC will broadcast the parade, hosted by the Today show team of Savannah Guthrie, Hoda Kotb, and Al Roker, according to TV Guide. CBS will also air the event with commentary by Kevin Frazier and Keltie Knight from Entertainment Tonight, the outlet reported.

Whether you tune in every year or this is your first time catching it live, one thing's for sure — it'll be a great show.