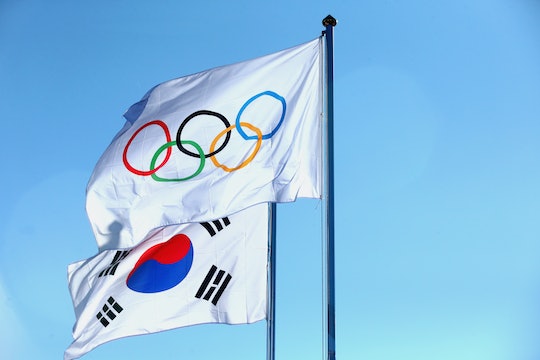 People all over the world are excited to watch athletes compete at the upcoming Winter Olympics — and some less athletically-inclined folks are super psyched for the games' opening ceremony. The Olympics, which are being held in PyeongChang, South Korea this year, get started on Friday, February 9. Plenty of details have been released about the kickoff event, but many are wondering the same thing: who is performing at the Olympics opening ceremony?

As it turns out, several K-pop artists are on the lineup for the opening ceremony, according to Billboard's scouring of Korean news sources. Ha Hyun-woo, lead vocalist of South Korean indie rock band Guckkasten, is reportedly on the bill. He is also known for appearing on the show King Of Masked Singer. Indie Ahn Ji-young, who is one half of the music duo Bolbbalgan4, will allegedly perform alongside the famous Korean rock band Deulgookhwa and its lead singer, Jeon In Kwon.

However, these announcements have not been confirmed by the official Olympics committee — and they likely never will be. A rep for the Olympics reportedly told Billboard that they are keeping the performers a secret in order to "surprise" audiences. So while the exact performers are still sort of a mystery, you can count on there being some sort of performance.

That being said, if you want to watch the opening ceremony live, you may have to sacrifice a little sleep. The PyeongChang opening ceremony will begin at 8:00 p.m. local time, which is 6:00 a.m. Eastern Time, and it will run for about two hours, according to Time. Dang. That's early.

And for those viewers in the Western Hemisphere who choose to wait until a more civilized hour to tune into the opening ceremony, NBC will be airing the festivities at 8:00 p.m. Eastern Time. This version will include additional commentary and interviews featuring hosts Katie Couric and Mike Tirico.

NBC's official Olympic website has got you covered with how to watch the opening ceremony (as well as each and every Olympic event). You can watch it all on NBC, NBCSN, CNBC, and on other NBC Universal networks; or you can stream it on NBCOlympics.com or via the NBC Sports app. Happy Olympics!