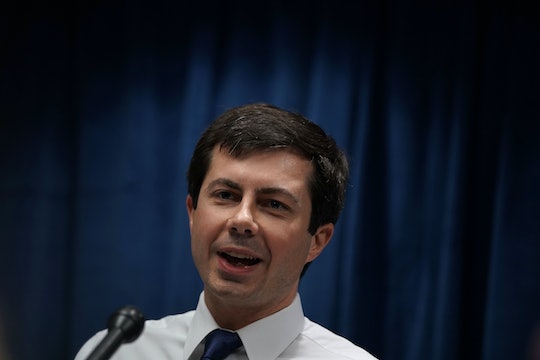 Who Is Pete Buttigieg? The Indiana Mayor Has Set His Sights On The Oval Office

Ahead of the 2020 presidential election, it's important to be informed of the Democratic candidates looking to win their party's nomination and get President Trump out of office. There are so many people who have announced that they are running in 2020 that it's hard to keep track of them. So, it's only natural for people to be wondering — who is Pete Buttigieg?

Most people might not have heard of Buttigieg (pronounced Boot-Edge-Edge, according to CNN) — the current mayor of South Bend, Indiana, a U.S. Navy veteran, and a Hufflepuff, according to The Hill. But he's a candidate that is worth getting to know. At 37 years old, he is not only one of the youngest politicians to enter himself in the race for the Democratic nomination, but he is also the only openly gay candidate in the race, according to Business Insider.

After announcing his running in January this year, Buttigieg has caught the attention of people, especially on Twitter, for the way he approaches issues. After the terror attack in Christchurch, New Zealand on Friday — where a gunman opened fire in two mosques and killed dozens of people — Buttigieg was one politician to assure the muslim people living in his community that they were accepted, loved, and safe in his community, according to HuffPost.

"I want you to know that this entire city has our arms around you, in love and peace, and that we support you as you practice your faith here in this community, our community, this home we share," Buttigieg wrote in an open letter. "We will do everything we can to ensure your safety as we do that of everyone who lives here and visits here."

Buttigieg calls himself a progressive candidate who thinks climate change is a "national security threat," according to PBS News Hour. Because of this, he supports the Green New Deal, according to Salon. But he is more than environmentally conscious — he also supports universal background checks before purchasing guns, supports pulling out troops from Afghanistan, and supports the Deferred Action of Childhood Arrivals program for immigrant children, according to PBS News Hour.

Although these might sound like issues that most of his opponents would agree with, Buttigieg said during an appearance on Fox News Sunday that he is a lot unlike his fellow candidates. He explained, according to the Guardian:

I do believe I'm not like the others. I belong to a different generation. I was in high school when school shootings started to be the norm, we're the generation that's going to be on the business end of climate change and also the generation that's on track to make less than our parents if nothing is done to change the direction of our economy.

He has a point.

And in spite of just being the mayor of an Indiana city since 2012, Buttigieg said during his appearance on Fox News Sunday that he is qualified for the job, according to Salon.

This certainly won't be the last time people hear from the mayor — he is definitely someone to keep an eye out for over the next two years.