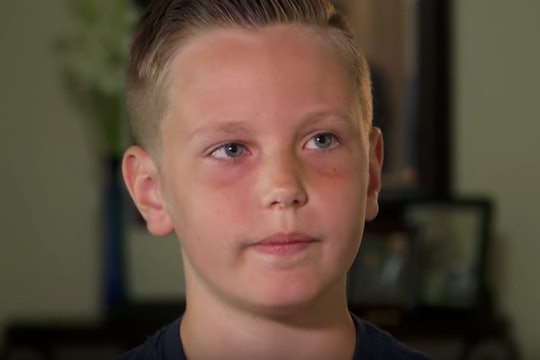 During President Donald Trump's first State of the Union, he chose to highlight tax cuts, the Veteran Affairs Accountability Act, job growth, and a young man he aptly called a "young patriot." So, who is Preston Sharp? This impressive young man started a movement that continues to honor fallen soldiers.

Preston Sharp is a 12-year-old young man from Redding, California, and attending the 2018 State of the Union as First Lady Melania Trump's guest. But Sharp was an exceptional, determined, and accomplished young man way before Tuesday evening, and Trump took it upon himself to highlight the young man's achievement's during his speech.

After noticing that the grave sights of fallen soldiers didn't have American flags and/or markers, Sharp "organized the placement of more than 40,000 American flags and red carnations on soldiers graves as part of his goal to honor veterans in all 50 states and to challenge others to join the flag and flower challenge," Press Secretary Sarah Huckabee Sanders said on Monday, according to ABC News affiliate KRCR. Sharp's mother, April, told KRCR in February of 2017 that her son "began honoring veterans' graves with flags and flowers when he was just 10-years-old."

As the president implied during his State of the Union speech, there's no age limit when it comes to patriotism.

Of course, it's been well-documented that Trump has taken it upon himself to not only define patriotism in a somewhat, arguably narrow way, but position himself as a champion of the military. While Trump has attacked NFL players, multiple times and, in certain instances, using "colorful" language, for kneeling during the National Anthem before games in an act of protest against racial inequality and disparity, he has also passed the Veteran Affairs Accountability Act; a piece of legislation that made it "easier for VA employees, including executives, to be fired by lowering the standard of evidence required to 'remove, demote or suspend' someone for poor performance or misconduct," according to a June 2017 report by CBS News.

Trump has made it part of his political platform to support the military and, while his "support" can be dissected and, often times, dismissed as political fodder, his choice to highlight the work young Sharp has done, and continues to do, is worth applauding. Yes, even if the State of the Union sense. As in, over, and over, and over again.

Viewers at home were quick to take to Twitter and highlight, and applaud, Sharp's dedicated to continuously honoring, and refusing to forget, the sacrifice of fallen soldiers. Here are just a few tweets highlighting how in awe we, as a country, are of Sharp's dedication.

According to multiple reports, Preston noticed that some graves weren't marked with flags or flowers while he was visiting his grandfather's grave in 2015. It was in remembrance of one veteran, his grandfather, that Preston found the urge, and the need, to remember every single soldier — regardless of their race, nationality, religious belief, gender, and, whether the young man is aware or not, their citizenship status — who has made the ultimate sacrifice for our country.

According to Preston's website, which encourages individuals to honor veterans every day, and not just on holidays, Preston won't "stop honoring veterans until he can't bend down anymore." And during the president's State of the Union address, Trump said, "Young patriots like Preston teach all of us about our civic duty as Americans. Preston’s reverence for those who have served our Nation reminds us why we salute our flag, why we put our hands on our hearts for the pledge of allegiance, and why we proudly stand for the national anthem.”

Sometimes, it's not about politics. Sometimes it's about listening, learning, and following the next generation.