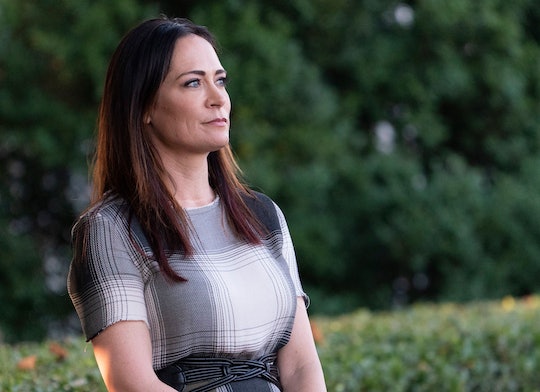 Everything You Need To Know About Trump's New Press Secretary

Of all the cabinet positions in the White House, who do you think has the hardest job? In my opinion, it has got to be the White House Press Secretary. With a president that is constantly going off script and involving himself in dozens of scandals, the job of press secretary seems stressful to say the least. And with Sarah Huckabee Sanders departing at the end of the month, the White House has finally announced her replacement. Hint: She's been by Melania Trump's side since day one. So, who is Stephanie Grisham? Trump's new press secretary is ready to make some major changes.

The announcement came today, from the First Lady herself, in a tweet that read:

I am pleased to announce @StephGrisham45 will be the next @PressSec & Comms Director! She has been with us since 2015 - @potus & I can think of no better person to serve the Administration & our country. Excited to have Stephanie working for both sides of the @WhiteHouse. #BeBest.

Grisham started with the Trump team as an aide and has remained in the White House as Melania's spokesperson since then, according to The New York Times.

If Sanders was tough, Grisham is even tougher. She's written scathing op-eds about the media's treatment of Melania, and hasn't been afraid to throw herself into public controversies — like the one where Trump's ex-wife, Ivana, referred to herself as the First Lady, according to CNN.

As press secretary, Grisham will become a senior official of the west wing of the White House and will act as a representative for the executive branch of the administration, according to The Hill. She'll also be responsible for fielding questions about new policies.

Grisham will also take on the role of White House Communications Director and manage internal and external communications, as well as leading media campaigns as directed by the president, according to NBC News. Basically, she'll be working hand-in-hand with Trump to manage how the world sees him, his policies, and everything in between.

The biggest question is whether or not Grisham will reinstate weekly press briefings, something that Sanders phased out long ago, according to CNN.

Sanders served as press secretary for two years, after replacing the controversial Sean Spicer. Remember, he's the guy who said Trump's inauguration had the biggest turn out of all the inaugurations in history?

And while that might seem like a long run in an ever changing Trump cabinet, Sanders' tenure was ripe with controversy. She was combative with the media, even hostile at times, and held less press conferences than those before her. And, she was called out on several occasions for disseminating less than truthful information, according to The Guardian.

Trump announced that Sanders would be leaving her post in a press conference earlier this month. But this might not be the last we see of Sanders. Some are speculating that she may run for governor of her home state, Arkansas, according to Market Watch. In fact, she'd be following in her father's footsteps if she won.

Will things change for those in the White House press corps with Grisham at the helm? Time will tell how she treats reporters and delivers information from the White House. But remember who Grisham's working for — it's her job to make him look good and that's not an easy task these days.