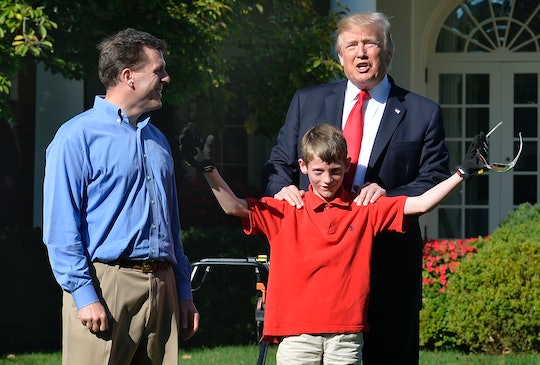 Frank Giaccio, an 11-year-old who goes by the initials FX, had a pretty big job on Friday. The kid who mowed the White House lawn runs a lawn-care business in his own neighborhood, but he probably never dreamed he would get to put his mowing skills to the test on one of the most famous lawns in the world. But apparently he once wrote a letter to the White House stating that it would be his "honor" to mow its lawn, and on Friday, he got to do just that.

When Giaccio started his task Friday, he reportedly put on goggles and ear plugs, then pushed a mower that belonged to the National Park Service, according to TIME. And he was so completely focused on the job put before him, he didn't notice when President Donald Trump himself came out to greet him.

When Giaccio wrote to Trump and the White House, he apparently said he wished to mow the White House lawn because "I would like to show the nation what young people like me are ready for," according to Business Insider. Which is a pretty impressive goal for an 11-year-old. Giaccio, who traveled from Falls Church, Virginia, to complete the task, certainly showed the world what he was about in a moment that's now gone viral on social media.

When Giaccio wrote to Trump, he said he would throw in free fuel during his lawn mowing shift if the president chose the power mower package, according to NPR. But according to several outlets on Friday, it wasn't just the fuel that Giaccio threw in at no charge.

Giaccio said he usually charges $8 per lawn, but decided to mow the White House lawn for free, according to TIME. I mean, it's a smart business strategy, if you think about. Don't a lot of businesses offer free or reduced services to high-profile clients, since the exposure will hopefully get them more business anyway? What's more high-profile than the White House?

Some people doubted the total accuracy of the story, but if nothing else, it's a super cute moment that Giaccio will probably remember for the rest of his life. But even with his newfound success, the boy said he doesn't want to be in the lawn-mowing business forever — Giaccio said he eventually wants to be a Navy SEAL, according to CBS New York.

While he talked to Giaccio, Trump praised the kid several times, which was probably thrilling for an 11-year-old who probably sent a letter to the guy with no idea whether he'd even hear back or not.

At one point, Trump told reporters of Giaccio, according to the video provided by C-SPAN, above:

The future of the country right there. We're lucky.

He's gonna do great things for our country.

Which is a pretty awesome thing for any kid to hear from the president.

The moment was not only an epic memory for Giaccio, but also a great story for the Trump administration. The administration faces a lot of scrutiny (rightfully, when some of the things Trump has done include discouraging taking action on climate change and spreading Islamophobic rhetoric), and any positive story is probably a welcome change. Do you think this one will end up in the "positive news" folder that's reportedly prepared for the president twice a day, according to VICE News?

Whether or not it does, one person who is likely to remember the moment and who would do well to scrapbook the visit is Giaccio. Whether he goes on to become a Navy Seal, or if he sticks with his lawn-mowing business, or chooses to do something else entirely when he grows up, for a day, he got to mow one of the most famous lawns in the world. And that's something he can certainly brag about when he goes back to school.

More Like This
6 Takeaways From The White House’s First-Ever Parents Press Conference
Meghan Markle Calls On Men "To Be Vocal" In The Aftermath Of Roe v. Wade Ending
Elmo Talks About Getting His Covid Vaccine In A Cute New Video
AAP Says Kids Will Face "Grave Consequences" Now That Roe V. Wade Is Overturned