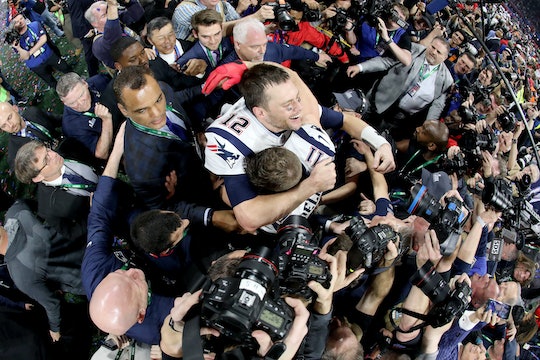 Super Bowl 2019 ended with an unsurprising Patriot's victory, which made Tom Brady the official record holder for most Super Bowl wins of any football player, ever. The game was a snooze until the last quarter when the Pats finally woke up, as has been their style in most of their Super Bowl games. After the initial cheering and celebrating ended, the New England team gathered for the official trophy ceremony, and in a turn of events that pleased anyone who's not obsessed with Tom Brady, Julian Edelman was crowned MVP of Super Bowl LIII.

Non-football fanatics might have expected Brady to win the award based on how mainstream his name has become, and sport's fans might have expected it based on his track record — he's won the award three times in the eight Super Bowl games he's played in according to Pro Football Reference. But Brady definitely wasn't the standout player this year, giving a rather lackluster performance that had Gisele Bundchen looking stressed for most of the game. Instead, the team's wide receiver, Julian Edelman, was made MVP for the numerous game-saving catches he made throughout the three-and-a-half hour game, more than earning the award. Even as someone just watching at home, it was clear the Pats couldn't have pulled off a win without him. And although Brady didn't bring home the MVP award, he still looked pretty pleased with just winning the Super Bowl and to get to cheer on his teammate.

The awards ceremony was an exciting one for the Pats, with Brady and Belichik being heralded as the "best ever" in the world of football. The Patriot's victory was also record-setting for the team, as their sixth Super Bowl victory sees them tied with The Steelers for most wins for a team according to Sporting News.

Obviously the win was exciting for all of the Patriots, but the night was especially good for Edelman. Fans were particularly excited that the wide receiver for the Pats got his due as Most Valuable Player because Edelman had to sit out for a quarter of the 2018-2019 season for a PED Suspension as reported by Sports Boston, which is the punishment for an illegal substance appearing in a player's bloodstream. The rule exists to prevent players from using steroids, but Edelman was recuperating from a torn ACL at the time of the suspension and one of his pain medications most likely led to the violation, for which he took full responsibility. Despite the setback, Edelman worked his way back up after the suspension to become the best football player of the year, in what one twitter user called a true "Cinderella story."

Clearly, Pat Nation was excited for the player, and his MVP win is pretty historic. He's only the seventh wide receiver to win the award according to Ben Volin of the Boston Globe, and he's the first MVP winner to be Jewish. Here's to at least one first in a night that felt like a repeat of Super Bowls past to many a football fan.

More Like This
I'll Be First In Line To Vaccinate My Kids, But I'll Never Forget That We Were Last
Here’s How To Fight For Abortion Rights
20 Of The Best Movies To Watch This 4th Of July
Patrick Mahomes & Brittany Matthews Reveal They're Expecting A Baby Boy In Sweet Video