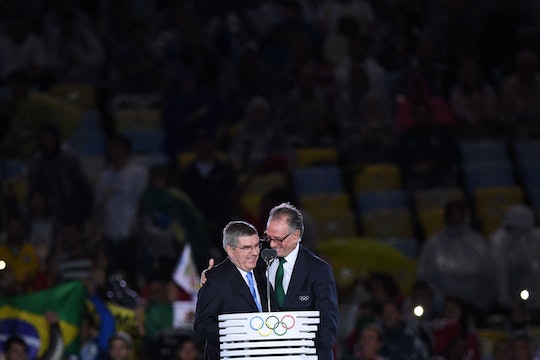 Who Is Waving The Gay Pride Flag Behind The IOC President At The Closing Ceremony?

The 2016 Olympics were 16 days of fierce, inspiring competition. Of course, this year's Olympics weren't without a little controversy (and fun), either. So, it only made sense that the closing ceremonies would be inspiring, colorful and wonderfully turnt up. Shortly after the IOC president gave a moving speech, thanking the refugee team and reminding us of the spirit of the games, viewers were left wondering, "Who is waving the gay pride flag behind the IOC president at the closing ceremony?" We may never know this individual's name, for sure, but the internet sure is dying to know and, well, the internet is nothing if not relentless.

I, for one, am eternally grateful that the internet is a thing, especially during the Olympic games. There's nothing better than good ole Twitter commentary, and when the Olympic games are either starting, happening, or ending, there's no shortage of 140 characters to remind us that what we're watching is, at the very least, entertaining. It also helps to point out things that we may have missed, like just how progressive these games really were, and how progressive the Tokyo games should (we hope) be. I mean, when you can see a stranger waving a gay pride flag right next to a North Korea flag (a place that isn't as, um, progressive as the rest of the world) you are acutely aware of just how amazing the Olympics truly are. In the end, to have so many different people from different countries come together and compete side-by-side, is nothing short of extraordinary.

There were a few other progressive moments during the closing ceremonies that viewers could hold onto. For example, during the iconic and traditional passing of the Olympic flag, the next host city, Tokyo, Japan, sent the first female governor in the nation's history to accept the Olympic flag. Yuriko Koike, who was elected earlier this month, accepted the Olympic flag while wearing a traditional (and not to mention, absolutely breathtaking) kimono. While Koike has already been scrutinized for the 2020 games, her ability to shatter the glass ceiling in her own country (which she described as more like "steel") leaves Olympic fans nothing if not hopeful. All we have to do is, you know, buy up all the gay pride flags we can muster and save for some tickets to Tokyo. Hey, at least we have four years to do it, right?

More Like This
15 Juneteenth Shirts For Kids To Express Their Pride & Support
Elmo Talks About Getting His Covid Vaccine In A Cute New Video
Meghan Markle Calls On Men "To Be Vocal" In The Aftermath Of Roe v. Wade Ending
Yellowstone Season 5 Officially Has A Premiere Date