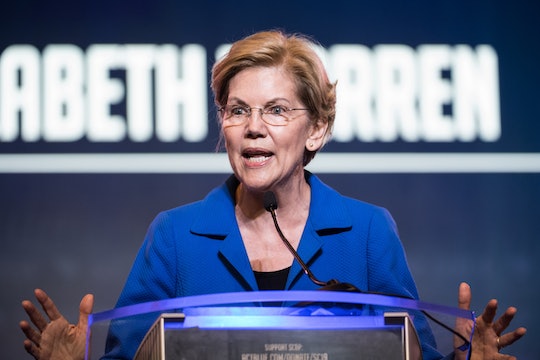 As the next presidential race inches closer, the Democratic National Committee (DNC) will hold the first 2020 Democratic debates on Wednesday, June 26, and Thursday, June 27. The DNC presumably had to split the event into two parts due to the large number of contenders vying to become America's next president. Although some presidential hopefuls were left out of the crowded debates, there are still plenty of candidates slated to participate, which is why you might find this breakdown about who's debating at the Democratic debates each night useful.

At the time of this writing, 24 Democrats are running for president, according to CNN. The latest hopefuls to join the race are former Pennsylvania Rep. Joe Sestak, Colorado Sen. Michael Bennet, Montana Gov. Steve Bullock, and New York Mayor Bill de Blasio, according to HuffPost.

I have no background in event organization or anything like that, but I think it's safe to say it was a tad difficult for the DNC to organize the first 2020 Democratic debates given the wide pool of candidates. But in the end, the DNC was able to figure it all out by splitting the event into two parts — one on Wednesday, June 26, and the other on Thursday, June 27, according to The New York Times. The debates will be broadcast from Miami, Florida from 9 p.m. to 11 p.m. ET on both nights, according to CBS News.

On June 26, according to Vox, the debating candidates are:

And on June 27, according to NBC News, the debating candidates are:

So, how were the lineups chosen? Was it at random or planned out? As it turns out, the DNC and NBC News — the hosts of the debates — held a "random selection" in New York City to create the lineups. "NBC News executives and producers drew names from a set of two boxes to determine the two groups — one dubbed 'purple' and the other 'orange'— before deciding which group would debate first," BuzzFeed News reported.

As for the format of the evening, "candidates will be allowed one-minute answers, 30-second follow-ups, closing statements, and responses to other candidates based on the moderators’ discretion, according to campaign operatives briefed on debate planning," BuzzFeed News noted.

As CBS News reported on Monday, four Democratic candidates won't be able to participate in the debates because they failed to receive at least 1 percent support in three qualifying polls or didn't rack up 65,000 unique donors by June 12, according to The New York Times.

Even though some contenders didn't make the cut, the first Democratic 2020 debates on Wednesday, June 26, and Thursday, June 27, are shaping up to be jam-packed events.