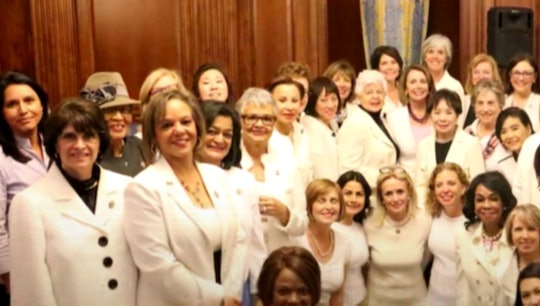 Why Are Women Wearing White At The State Of The Union? They're Sending A Message

After being pushed back because of the longest government shutdown in U.S. history, the State of the Union Address finally went down on Tuesday, Feb. 5. President Donald Trump started his speech in front of a joint session of Congress at 9 p.m. (ET) As cameras starting rolling for the live broadcast, viewers at home couldn't help but notice the color a fair amount of Congress members chose for the occasion. But why are women wearing white at the State of the Union?

As it turns out, Democrats are sending a clear message with their choice of clothing color. Just ask chairwoman of the Democratic Women' Working Group, Florida Rep. Lois Frankel. Frankel encouraged Congress members to wear white on Tuesday as a nod to all of the voters who helped the Democrats snag a majority in the House during the midterm elections, USA Today reported. Wearing white at the State of the Union address also served as a reminder that women's economic security is a priority. And last but not least, this particular color honors the women's suffrage movement — which ultimately led to the 19th Amendment.

The public call to action was tweeted by Frankel on Monday. She wrote, "By wearing suffragette white to #SOTU2019 tmrw we’re sending a message to everyone that voted for @HouseDemocrats & delivered us the majority that we're working #ForThePeople, promoting the economic security of women & their families!"

Frankel also shared a photo of dozens of Democratic women posing in white at the Capitol ahead of the State of the Union Address on Tuesday, tweeting, "Standing hand in hand with @HouseDemWomen wearing #Suffragette white to #SOTU as we fight #ForThePeople!"

If you're like me, then you're probably wondering: What about the guys; are they wearing white, too? As The Hill reported, House Majority Leader, Maryland Rep. Steny Hoyer, was spotted handing out white ribbons for Democratic men to wear to the State of the Union. And apparently at least one male congressperson will be wearing white as well: Rep. Dean Phillips of Minnesota. He was spotted on social media sporting a white suit ahead of the event.

In case you were wondering, Twitter was all for the message sent by Democrats' white ensembles. One person wrote, "Suffragette sisters in solidarity. Love it."

Another Twitter user commented, "Literally the only reason I want to tune in. Can’t wait to see Pelosi in white over trump’s shoulder."

If you remember, Democrats also wore white to President Donald Trump's first address to a joint session of Congress back in 2017, according to NBC News. This is a little more than a month after Trump's inauguration and the first Women's March. Hillary Clinton also chose to wear white while accepting the Democratic nomination for president in 2016.

Basically, wearing white = bad*ss feminist move. Regardless of what President Donald Trump actually said during his address, it's difficult to argue the Democratic women didn't stand out in a sea of dark-colored suits on Tuesday night.