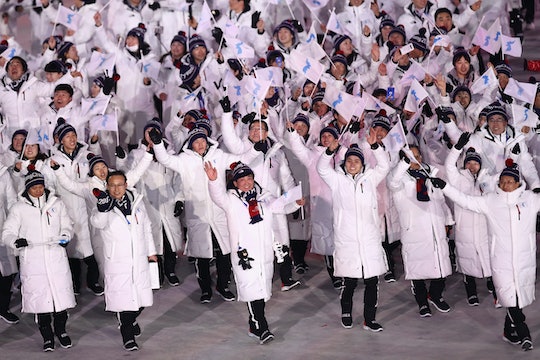 This was always the plan, however, according to the New York Times. Days before the 2018 Olympics opening ceremony in an address to the International Olympic Committee, South Korea's president, Moon Jae-in, said that the games were integral in helping the two countries to enter into negotiations about nuclear weapons programs.

"Many considered it an impossible dream to have an Olympics of peace, in which North Korea would participate and the two Koreas would form a joint team," he said in the address.

Song Seung-whan, a South Korean actor and the director of the opening ceremony said in a New York Times interview before the ceremony that "Korea is the only divided country in the world" and noted that the games would be the opportunity to unify them in some way. "It will be an opportunity for the peace we were thinking of to be shown to the world in a more deep way," he added.

While North Korea has competed as a team in almost every Summer Olympics games since 1972, except for those in 1984 and 1988, this marks the first time the country has agreed to participate in the Winter Games in eight years, according to the New York Times. It wasn't even certain if North Korea would be part of the 2018 games until roughly a month before the opening ceremony when North Korean officials agreed to send athletes, a performance art group, and even a cheer squad to the Olympics in PyeongChang.

For South Korea, whose leaders looked forward to uniting the teams for the games, it was a breakthrough of sorts. And when both teams arrived at the opening ceremony in matching uniforms and under the same flag to unify them for the Olympics, it was a pleasant surprise to some, who may not have known if the two countries would be on opposing teams.

There were some pretty big moments of the 2018 Winter Olympics opening ceremony, including the Bermuda athletes coming out in bermuda shorts, the dancers keeping it up all through the parade of countries, and the actual lighting of the Olympic cauldron itself. But seeing both Olympic teams from both Koreas come out together was arguably one of the highlights of the ceremony that kicked things off for the Winter Games.

According to the The Washington Post, the unified team don't stop there. North and South Korean athletes will also come together for the women's hockey game on Saturday, and once again, they'll be donning matching uniforms that represent Korea as a whole. And what's most important, President Moon Jae-in said at the pre-opening ceremony reception, is that both countries were able to come together.

"Had it not been for the PyeongChang Olympics, some of us might not have had chance to be together in the same room,” he said, adding that now both countries can take strides toward talking "about our future." North and South Korea working together in the Olympics is probably the right place for them to start.