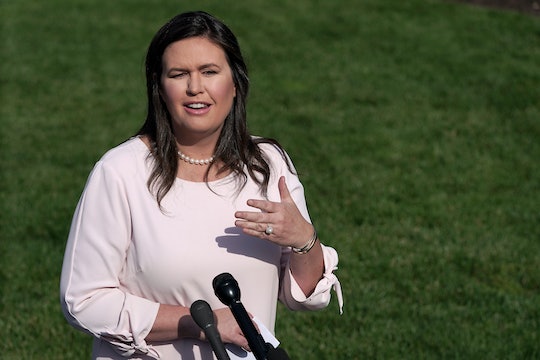 Another day, another member of the Trump administration is out. President Donald Trump announced Thursday via Twitter that White House Press Secretary Sarah Huckabee Sanders is leaving her role, a job she has held for three and a half years. So, why is Sanders bidding adieu to Trump and the White House? It's possible she's eying a new career in politics.

Trump didn't provide a reason for Sanders' departure, but like a true showman, he did provide a hint about what's in store for her next. He added, "She is a very special person with extraordinary talents, who has done an incredible job! I hope she decides to run for Governor of Arkansas - she would be fantastic. Sarah, thank you for a job well done!"

Sanders' dad is former Arkansas Gov. Mike Huckabee, so I wouldn't completely rule this tease out.

CNN correspondent and journalist Kaitlan Collins gave more life to this possibility, writing on Twitter shortly after the announcement was made: "I'm told that in private conversations in recent weeks, Sanders has floated running for it herself, telling people she thinks that would be a good next move."

She continued, "My point: 2022 seems far away, but what Trump is floating is a real option that's being considered."

Sanders has yet to confirm her next plans, but she did issue a statement about appreciating the opportunity she was given at the White House. "I couldn't be prouder to have the opportunity to serve my country and particularly to work for this President," Sanders said, according to CNN. "I've loved every minute — even the hard minutes."

And there were plenty of "hard minutes" for Sanders, from all of her false statements to her frequent battles with the press. But most of all, Sanders found the time away from her family to be the most difficult aspect of her job.

"Being away from my family, that is the hardest thing," she told C-Span when asked about the topic. "The job is 24 hours a day, seven days a week and never stops. That is tough. I have three young kids and a husband who still likes me, a good thing. They want to be around me more often than I get to be there. That is the hardest part of the job."

Circling back to the rumor that Sanders might run for governor one day, there's a good chance her dad will help her out if she does. Huckabee had nothing but high praise for her daughter, which he highlighted via a dig about CNN.

"Well, @realDonaldTrump is losing @PressSec who is a great one and I say that with as much objectivity as Fake News CNN has toward @POTUS," he tweeted. How touching...

Whether Sanders runs for the governor of Arkansas position remains to be seen, but if she does decide to go for it, it looks like her former boss and family will have her back.