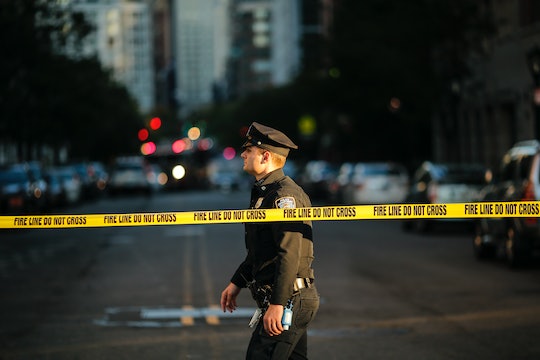 The NYC Attack Is Terrorism, But The Las Vegas Shooting Isn't, & It All Comes Down To Islamophobia

Eight people were killed in New York City Tuesday in what is being called the deadliest terrorist attack on the city since 9/11, after a man drove a rented truck into a crowd of cyclists and pedestrians, according to CNN. The suspect is said to be a 29-year-old Uzbekistan native living in New Jersey, and authorities have reported that he left a note near the truck claiming an affiliation with ISIS. It didn't take long before authorities said the attack was terrorism, although that still hasn't happened in Las Vegas, where a gunman killed 58 people at an outdoor concert. Why is the New York attack considered terrorism, but not the Las Vegas shooting? It seems to all come down to the motive of the attacker — although not everyone is convinced by that explanation.

When someone intentionally plows a truck into a bike lane, or opens fire on a crowd from the window of a hotel room, it seems pretty reasonable to consider them both to be examples of terrorism. But, according to The New York Times, that's not actually the case in a technical sense, since in order to be considered a terrorist attack, there specifically has to be a "political, ideological, or religious motive." In the New York attack, that was reportedly clear — if he left a note saying he acted on behalf of ISIS, his motive is hard to argue against. In Las Vegas however, the shooter's motive is much more of a mystery.

There's no question that the Las Vegas shooter seemed to have planned his attack very carefully, and well in advance. According to Politico, the shooter chose to attack Las Vegas after scouting out locations in other cities, and at the time of the attack, he had 23 weapons in his hotel room, chosen from his overall collection of 47 guns purchased over the course of a year in a variety of different states. He also reportedly modified a number of them to operate as automatic weapons — which are illegal — in order to increase their killing power. And in the end, he killed enough innocent concert goers that the Las Vegas attack has become the deadliest mass shooting in modern United States history.

But despite what seems to be a clear intention to take as many lives as he possibly could, it's still not known why he did it. And in the absence of a motive — and a political or ideological agenda — the Las Vegas shooting doesn't yet fit the definition.

Not everyone is happy with that explanation though — namely because it ignores the impact that race and suspected religious affiliation has on our notions of what terror attacks are supposed to look like. Thanks to 9/11 and ISIS and the general overall rise of Islamophobia, "terror attack" has seemed to become a kind of shorthand for any kind of violent act perpetrated by someone who looks like they could possibly be Muslim (even though not every brown person is Muslim and vice versa). The term "terrorist" is as much a racial slur used by white supremacists as it is a criminal category. And despite the fact that, according to Vox, more people in the United States have been killed in attacks by white men than by Muslim terrorists or foreigners during Trump's presidency so far, the association between terrorism and Muslim is so strong that, instead of pushing for greater gun safety, the president continues to call for "extreme vetting" and tougher immigration restrictions, arguing that that is what will really keep the country safe.

That doesn't downplay or in any way excuse the actions of the New York attacker, nor anyone else who has taken innocent American lives in the name of a radicalized version of Islam. The fact that we shouldn't automatically rush to assume that non-white attackers are Muslim terrorists doesn't negate the need to continue to condemn the individuals who actually are fighting on behalf of ISIS or similar terrorist groups.

But the fact that the New York attack still somehow feels different from Las Vegas even though it was significantly less deadly — and the fact that it is once again stirring up anti-Muslim sentiment stemming from xenophobia — means that, while terrorism might have a specific definition, it's connotation is much more complex. Even if the Las Vegas shooting doesn't fit the bill for terrorism, it should be treated with the same urgency for policy change and protection for Americans as every terror attack by a non-white person is.

The motive behind the Las Vegas shooter may never be clear, and it might never be known if the attack was actually terrorism. But it seems that if we are willing to do whatever it takes to fight terrorist attacks, we also need to be willing to fight all deadly attacks and mass shootings by white people in the United States — particularly when they are so well thought-out — with the same urgency.