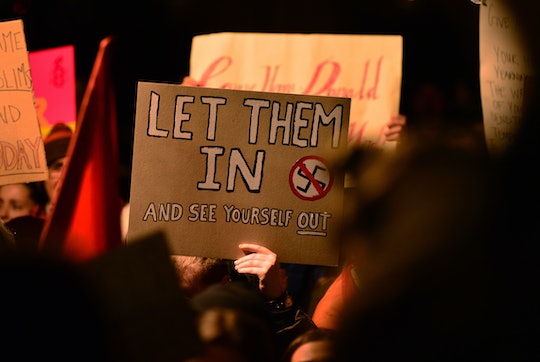 This Is Why The Supreme Court Cancelled Trump's Travel Ban Hearing

President Donald Trump's initial, controversial travel ban expired on Sunday, and in its place he set new regulations extending to citizens from countries that were previously not included. An upcoming federal ruling was meant to assess the legality of the ban, but the recent switch-up has caused the justices to change their schedule. So why won't the Supreme Court hear the travel ban case? Oral arguments had been set for some time, but recent events have changed the projected timeline.

The justices cancelled the Oct. 10 engagement because, given the expiry of the old case and the instating of a new ban, the prepared arguments pertaining to the initial travel ban are more or less irrelevant, at least from a legal standpoint. Both sides are now regrouping and reexamining the new legislation, with the potential — but not the guarantee — that the case will be revisited. According to The Washington Post, on Monday "the justices asked for new briefs about whether the third rendition of the travel ban means there is nothing left for the court to decide." The court should receive the briefs by Oct. 5, and will later decide if it has any part to play in this fight.

The specific regulations vary from nation to nation, but, regardless, travel and tourism will be next to impossible for those targeted. And, this time around, the ban has no set expiration date.

So is postponing the hearing a bad sign for citizens from affected countries? "By canceling the arguments for now, the court signaled that it may never decide the case," The New York Times reported, while noting that "Trump’s latest order is likely to start a third round of litigations [which] may eventually reach the Supreme Court."

After consulting with legal experts, Reuters reported that the new ban "could be harder to fight in court than the prior ban." For families affected by the updated, eight country ban, it's a terrifyingly vague timeline to reckon with — one that might permanently limit professional and educational opportunities, while simultaneously splintering families apart, worldwide.

Amidst ranting about the #TakeAKnee or #StandForOurAnthem controversy, the president did briefly address the new order. "Making America Safe is my number one priority," Trump tweeted on Sunday. "We will not admit those into our country we cannot safely vet," he insisted, sharing a link for his followers the new travel ban policy on the White House's website. As written, the piece of legislation creates said restrictions in order to prevent "terrorist entry into the United States," according to a press release.

In its first form, the ban prevented people from predominately Muslim nations from traveling to the United States. In its second, the ban seems to have softened, but this isn't truly the case. "Adding North Korea and Venezuela provides some cover," University of Virginia Law School professor Douglas Laycock told USA Today. "The new ban makes it look less like it was just aimed at Muslims," adding that it's just a facade that might successfully preserve the new ban.

While there is a perception that the modified ban is "less discriminatory," that is could be even more harmful than previous orders. And when it comes to what the courts have to say about it all — whether they decide to rule against, in favor, or at all — that still hangs in the balance.