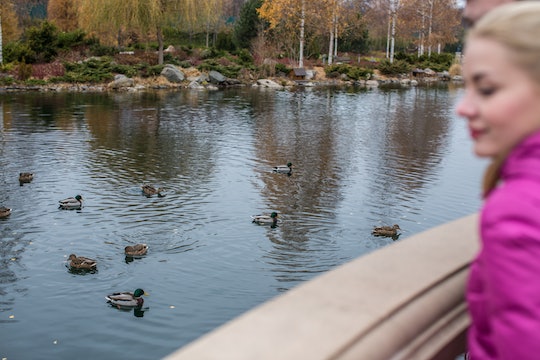 Why You & Your Kids Should Never, Ever Feed Ducks Bread At The Park

As families continue to spend more time outdoors this summer, parents and kids are likely to hit up area parks with their kiddos in tow. In between playing on playgrounds, picnicking, playing catch and more, caregivers might find themselves taking a stroll around local ponds, which often attract ducks. It might be tempting to bring along something special to throw out to a group of ducks — like leftover bread from that picnic, for example. But parents might want to re-think this seemingly harmless way of interacting with nature. In fact, this is why you and your kids should never, ever feed ducks bread at the park.

You might be thinking to yourself, "Wait, what?! How can this be?" However, just because people feeding bread to ducks is a common sight doesn't make it a good choice. Because as it turns out, bread has precisely zero nutritional value for ducks, Popular Science reported. “White bread in particular has no real nutritional value," a spokeswoman for the Royal Society for the Protection of Birds (RSPB) told The Guardian back in 2015. "So while birds may find it tasty, the danger is that they will fill up on it instead of other foods that could be more beneficial to them." The meme below — which is making rounds yet again on social media in recent weeks — perfectly sums up the issue.

People should be especially careful about what they're feeding to ducklings. Not only does bread lack the proper nutrients that ducks need to survive, feasting on a bunch of bread makes it more likely for baby birds to wind up malnourished. Because instead of the plant nutrients required to help them grow properly, they're filling up on empty calories. This, in turn, could case them to develop a condition called angel wing, Express reported.

“There is a risk that ducks and other waterfowl can get an illness known as angel wing, which is caused by not getting the right nutrients in their diet," RSPB spokesman Harry Bellew told Express in a 2017 interview. “The illness causes as deformity in birds’ wings that can hamper the way they fly or even stop them altogether, which could obviously be fatal." But that's not all — because even extra bread crumbs lying around a duck's habitat could prove harmful. Bellew continued:

Uneaten, rotting food left by ducks can trigger noxious odours and fuel algae that can eventually eradicate fish from the area, as well as attracting rats, mice and insects. Mouldy bread can also cause aspergillosis — a fatal lung infection that can wipe out waterfowl in flocks.

Who knew that tossing "innocent" bread crumbs could be so detrimental to a duck's health? Instead, there is a rather long list of treats you can throw out to ducks that won't make them sick, according to Backyardchickens.com. Some of these duck-friendly foods include: vegetables like cucumber, corn, peas, bell peppers, beans, carrots, cabbage, kale, squash, zucchini, and more. Fruits like apples, bananas, peaches, grapes, melon, pineapple, and more can be healthy treats as well. (If you take a look at this massive list for yourself, it seems as if most things are much better for ducks than bread.)

Thanks to the PSA meme about the danger of bread to ducks that continues to circulate on social media, more and more people are slowly learning about the hazard for themselves. And they couldn't be more surprised. "I used to feed the ducks at Refugio Park bread all the time when I was a kid.. I’m going to hell," one Twitter user wrote.

Another person tweeted, "i just heard you’re not supposed to feed bread to ducks i am so sorry to all the ducks i fed bread to i hope you are all ok and happy and healthy."

Yet another Twitter user wrote, "what the f*ck i didnt know u couldnt feed ducks bread.. im shook."

Now that we know how much of a no-no feeding bread to ducks is (and why this is so), let's help spread the word so well-meaning people don't unknowingly jeopardize the health of innocent water foul. Because the family-bonding act of feeding wildlife with your kiddos should ideally be helping out nature — and not slowing killing innocent ducks.