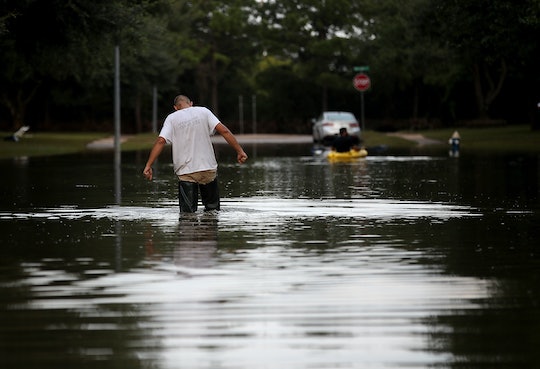 It's only been a week since Hurricane Harvey's showers left Texas inundated, leaving at least 60 dead and tens of thousands displaced, and the state is still reeling from the massive amount of damage it endured during the storm. Now, a new storm is making its way up to the United States, and many Americans are worried about its trajectory once it hits land. Will Hurricane Irma hit Texas, as well, or will the state be able to take a breather after its recent devastation?

As with all things weather-related, it's hard for meteorologists to guarantee either way — but at least for now, it fortunately looks like Texas is safe from Irma. However, other states and territories are currently battening down the hatches in preparation for Irma's arrival, since the storm seems like it could hit certain parts of the United States.

According to CNN, Irma is currently on track to travel either near or directly over the Virgin Islands and Puerto Rico by Wednesday afternoon. Computer predictions then show the storm traveling near the Dominican Republic, Haiti, and Cuba near the end of the week before possibly heading up to Florida over the weekend.

Some models also show the storm getting as far as Georgia and South Carolina, while more hopeful predictions show the storm swerving back out to sea and bypassing the United States entirely (knock on wood).

Regardless of the uncertainty surrounding the storm's trajectory at the moment, countries and states in Irma's possible path aren't taking any chances. With Harvey's recent devastation fresh in mind, both Florida and Puerto Rico have declared a state of emergency, which allows local governors to mobilize resources more quickly, deploy emergency personnel, and recommend evacuations if needed.

"Current forecast models have Florida in Irma's path — potentially impacting millions of Floridians," Florida Gov. Rick Scott said in a statement on Sunday, warning Floridians to prepare for the storm. "While the exact path of Irma is not absolutely known at this time, we cannot afford to not be prepared."

With any luck, Irma will veer away from the United States altogether, but in case that doesn't occur, it's best to be prepared. Fortunately, at the moment, it seems like Texas will be saved from a second hurricane, but the storm could still spell trouble for the countries and states in Irma's path. For those who could be affected by Irma, it's important to take the threat of the storm — whose rapid development has both impressed and worried meteorologists — as seriously as possible and prepare for the worst, while still hoping for the best.