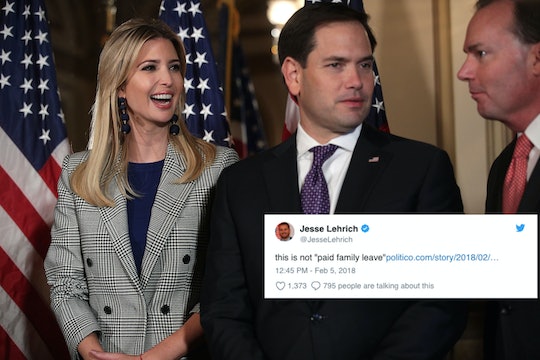 It's been nearly a year since President Donald Trump's eldest daughter and suspected favorite child was given an "official" (unpaid) role in the U.S. government. Throughout her father's campaign, she's touted herself as a champion for women, and now she's reportedly working toward making good on one of her key talking points. But will Ivanka Trump's new paid family leave policy actually help families, or what? Trump has teamed up with Republican Sens. Marco Rubio of Florida and Mike Lee of Utah to work on policies meant to showcase the kinder, gentler side of their party, Politico reported, starting with addressing the fact that the United States is the only industrialized nation without paid parental leave. One idea they're reportedly considering is funding such leave with the Social Security funds.

Much like her father, Trump has yet to accomplish much at her new job, unless you count being booed in Germany for defending her father's attitude towards women, or being compared to a "half-wit Saudi prince" by an Indian diplomat. In her role as adviser to the president — as well as her side hustle as an author — Trump's stated goal is to empower her fellow working moms. Unfortunately, the policy, as it stands, will do nothing of the sort (I'm terribly sorry if you just spit kale smoothie all over your screen from the shock of that revelation).

Most people, regardless of party, agree that paid parental leave is a good thing, but it's largely thought of as a Democratic issue, because fiscal conservatism and limited government are two of the Republican Party's biggest tenets. That means that while they're cool with paid leave in theory, they don't want to pay for it, and they don't want to make businesses pay for it, either. So who's left? The parents themselves, of course.

The new plan, according to Politico, would give parents the option to use Social Security benefits after the birth of a child. We're not talking about additional benefits, though; this would come from the same pool of money taxpayers would be entitled to upon retirement. Parents who take advantage of the benefits when they're young would then have to wait longer to start receiving them when they're older, in order to make up for their "early withdrawal" of the funds. In other words, if you want to take time off to let your C-section scar heal, you'd have to agree to continue working for a couple of months past your original retirement date. That's no problem, though, because we all know exactly what our financial situation will be like in 2060, right?

Is this a good deal for parents? For answers, we'll look to a policy outline drafted by the anti-feminist Independent Women's Forum, a group that opposes Title IX and argues that the wage gap is both a myth, and also somehow women's fault. IWF's argument is that you'll totally be able to make up that money in less time when you're older, because "individuals' earnings typically increase substantially from their 20s to their early 60s." Besides, the plan would only pay, on average, 45 percent of workers' current base salary. And if 45 percent isn't enough, no problem, policymakers "could offer double the amount of parental benefits suggested," as long as they could get parents to agree to put off retirement for twice as long. And don't forget, that's per kid.

The IWF also makes the spurious claim that "Social Security is premised on the assumption that it is more important for workers to have their money when they are older than when they are younger," completely ignoring the fact that nearly one-third of current beneficiaries are retirees' spouses and children, younger workers with disabilities, and survivors of deceased workers, according to the Social Security Administration. If a parent uses this "benefit" and then has an untimely death, will their surviving child be forced to "defer" their survivor benefits as a result? Would a parent who becomes disabled have to suck it up for a few weeks before they could put food on the table again?

Rubio is "still in the early stages" of drafting the new policy, according to Politico, and the White House said that Trump has been considering a number of different options. But unless they can figure out a way to convince Republicans to help families now without screwing them over later, it looks like paid leave is still a long way off.

More Like This
Dads Share What Paid Family Leave Would Mean To Them In Heartwarming Video
This Map Illustrates Just How Many States Would Ban Abortion If Roe V. Wade Is Overturned
Obamas Issue Powerful Statements After Supreme Court Ends Roe v. Wade
6 Takeaways From The White House’s First-Ever Parents Press Conference